I…might be psychic. How else would I know to put a reminder in my phone to go to Uzu on a Saturday night weeks ago, before I had any idea that I’d be coming down with a cold and it would be snowing? Could there be any more perfect conditions for eating ramen? Uzu doesn’t have a menu online so I said a prayer in hopes that they’d have something spicy to clear my sinuses and we headed out.

Uzu was offering a pork bun appetizer, of which we ordered one to split, along with two types of broth and a variety of add-ons. My husband got the shoyu broth, extra spice, and kimchi, and I decided to try the miso broth with extra spice. 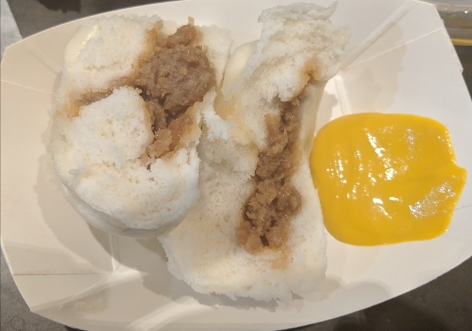 The bun was soft and moist with slightly sweet pork and a dollop of French’s yellow mustard. Mustard is a great idea here, but this is a poor implementation. An investment in good mustard would pay dividends.

On to the ramen:

The miso broth had a rich mouthfeel that brought out the heat of the extra spice. It wasn’t overly salty and had enough spice to briefly clear my nasal passages. I liked the texture of the noodles and the quantity of veggies and mushrooms in the soup. The meat was good but nothing super special. My husband and I both felt that our eggs were actually too liquidy (I think they were poached instead of soft-boiled), and they sort of disintegrated into the broth.

The shoyu broth was less-spicy and sort of thin tasting. It still had a nice balance of flavors and the kimchi was a good, crispy addition. In this picture you can see the egg melting away faster than the Wicked Witch of the West.

Overall, Uzu hit the spot and was fine for what it was: two dudes assembling soup over a couple of hotpots. It’s nice that I didn’t have to wait for my soup because I would have devolved into cold-induced hysteria, but once again I want to express my strong disdain for Union Market and its entire gimmick. Uzu, I get it. Brick-and-mortar restaurants are hard. But the limited space, college-student-level cooking equipment, and sensory overload of Union Market are not doing you any favors. Also, you have, like, no overhead costs. Please charge less.

Bottom line: $15 for soup cooked on an electric hotplate? $3 for a scoop of kimchi? I don’t care how good you are. Get some seating, a few more broth options, and a drink list and we’ll talk.