Supra calls itself “A Georgian Feast.” “Hey! Hey! So it’s like food from Atlanta?” said my husband, cracking himself up at his own lame joke. “Put that joke in your blog!” Like most red-blooded Americans, my knowledge of the Republic of Georgia is limited to a couple of measly bullet points:

Supra itself feels like it might be your typical good-but-not-great uncommon-ethnicity DC small plates eater. However, their waiters have clearly been trained to pronounce all the dishes with beautiful accents and they have a big variety of Georgian wines.

The first dish to arrive was the cold beet salad. The sour dressing coated both the roasty beets and fresh spinach. The smoky cheese added something new and interesting. That dish was a surprising crowd-pleaser.

Next came the aforementioned cheesy bread: adjaruli. I think we were supposed to let the server mix this up for us but I kept trying to get up in there with my phone for a photo op, so they left us alone with it.

Basically, the egg is barely cooked. You pop the yolk and stir the whole mess together into a giant bread-bowl of egg and cheese bliss. I was so enamored by this, as was everyone else at the table, that I spent the next morning replicating it in my own kitchen, with mixed results. You can’t go wrong here. It’s like a breakfast calzone.

We ordered three meat dishes: the ribs, the sausages, and the chicken kabobs. The rib meat fell off the bone and had a good level of heat. We licked them clean.

The sausages had a fantastic texture, a delicious spicy mustard, and a fennel-y, Mediterranean flavor profile that was beyond delicious.

The chicken kabobs, on the other hand, were kind of boring. We have only ourselves to blame for ordering literally the most boring thing on the entire menu. The meat was very moist, though, so kudos to them! 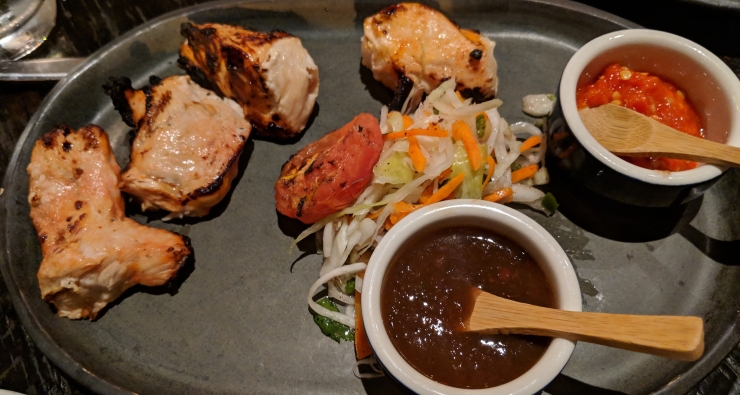 We had the roasted kabocha squash next. I personally loved it and it might have been my favorite non-cheese-bread dish of the night. The squash was a little dry, but it paired so well with sweet, creamy yogurt sauce and grilled scallions. They also didn’t skimp on the size of the dish:

Finally, we had the house special soup dumplings. We ordered three each of the vegetarian (potato and cheese) and meat (ground beef and pork). The dumplings came with a thorough explanation of how to eat them, and they were–ahem–sizable. They were super bready but the meat inside was delicious.

My MIL and Grandma each ordered a different dessert–the grape pudding and the special chocolate cake. Honestly, they looked better than they tasted and were not worth it at all. And if you’re still hungry after dinner here, you have a serious problem.

So, some more fun facts:

Bottom line: Supra won’t blow your mind, but it is unique and a good value given the size of the plates. Bring a bunch of friends.