We arrived at Cubano’s late due to my being detained at a work function and I didn’t know what to expect. They don’t take reservations so it could have gone either way. It was hopping inside, but the rest of my fam was already seated, which was good because I was beyond starving.

“How big is the mojito grande?” I wondered aloud.

“Not grande enough,” he responded. But he was wrong. So, so wrong.

I think this mojito is grande enough for almost anyone. It’s also not terribly, horribly sweet.  It definitely fulfilled my liquor requirements and, at $10.95, is a great deal for a cocktail regardless of how much rum they actually put in it (which was substantial).

Cubano’s menu is kind of crazy-long. I love the choice but it’s hard to choose with so many different types of things on the menu. And, given the size of the menu, what were the odds of two of us ordering the same thing? When you’re dining out with meat-and-potatoes Grandma, pretty high. Cubano’s had just the thing for her.

After exploring all options, including a sampler platter, I settled on an old standby: ropa vieja. I just can’t turn down that beefy goodness. They were also happy to accommodate me by giving me extra fried plantains and no rice. 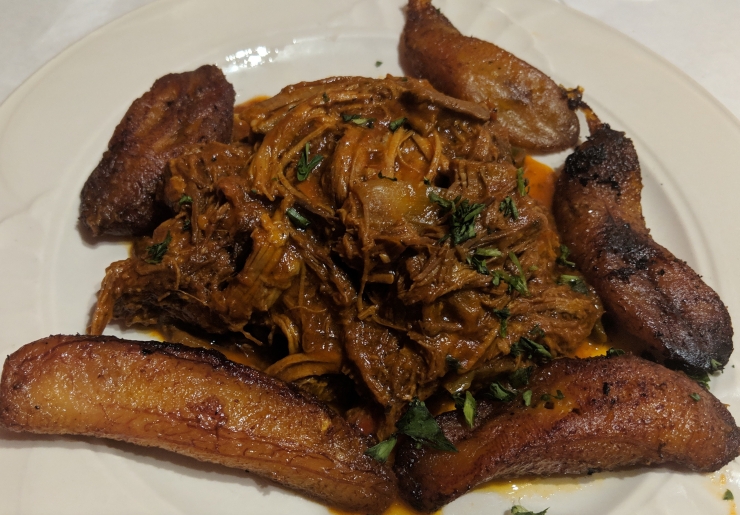 This was a super-reasonable sized entree. The beef was so tender and tomato-y and the plantains were sweet without being cloying and sticky, which made me feel slightly healthier, I guess. I know that hunger is the best spice, but I think this would have been delectable under any circumstances.

My husband had the Cubano sandwich, because someone had to (thanks for taking one for the team, babe!)

It was overwhelmingly porky with just a light layer of cheese and maybe just not quite enough mustard or pickles. The bread was deliciously crispy. This also got devoured. 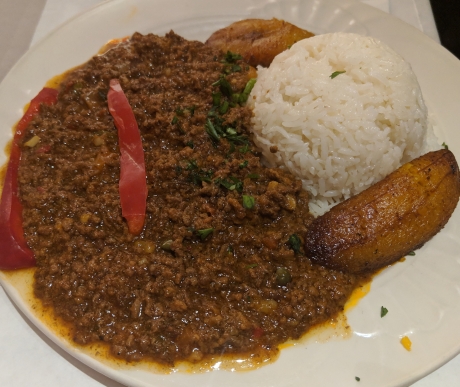 My FIL and Grandma both had piccadillo. This probably would have been my second choice since I love this dish under normal circumstances. However, I found Cubano’s piccadillo just a little lacking. Grandma “accidentally” left us her leftovers so I was able to go back for a second taste and I’m coming back with the same ruling: it was kind of like eating just a pile of cooked ground beef. Where it should have had salty capers and plump, sweet raisins, it was kind of just a mess of dog food. Sad face.

My MIL had the shrimp salad. It was very lightly dressed and the shrimp was perfectly blackened. It had a generous helping of ripe avocado on top too. She promptly declared it the third-best salad she’s ever eaten, after two salads I have produced in recent memory. This declaration surprised nobody.

Naturally, you can’t leave Cubano’s without tres leches and a Cuban coffee. The cake had a wonderful sprinkling of cinnamon but was pretty dry. Come on, Cubano’s. On the other hand, my cafe con leche was phenomenally strong and rich, which is good because they’d get their Cuban card revoked otherwise.

Bottom line: Cubano’s is a tasty place for sit-down Caribbean cuisine but not life-changing. The climate is nice and you can get in last-minute.