The Michelin stars for this year were released last week and obviously I was all over that shit. I had originally planned my birthday dinner for the family to be at China Chilcano, which I always love, but couldn’t pass up this opportunity. Bresca had reservations open for all of two minutes. By the time I found a time that worked for all of us, there were basically no slots left. So here we were on a Wednesday at 5:45. 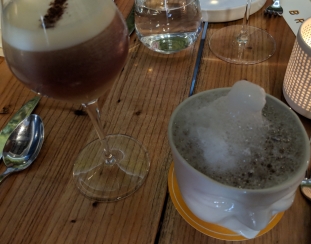 The cocktail list is so amazing and inventive that I had no idea what most of the ingredients were. I settled on “Behind the Visage,” which had the flavors of mezcal and yuzu. It was cool and refreshing and served in a literal visage to boot! It’s so creepy!

Because I’d been planning this restaurant visit for a week prior, I was very excited to hear that we should be ordering about one small dish per person plus one of the larger protein-based dishes. As per usual, my mother-in-law’s request involved bread and cheese-based things, and my father-in-law and husband requested that I order everything so they wouldn’t have to read anything.

We started with my mother-in-law’s all-time favorite: bread! Two orders of the Einkorn loaf–one with the herbed butter and one with the smoked trout roe butter. In all honesty, it was pretty good bread but the butter was to die for, and the smokey, gooey texture of the roe paired well with the creamy, slightly sour butter. I’m not including a picture because I’m pretty sure we all know what bread looks like. Next came the stone fruit and the burrata with carrots. The sweet fruit (mostly plums) was served with a cold, herbal broth, and the burrata had plentiful cheese and thinly sliced, caramelized carrots. These were good but again, not my faves.

Here was my big pick: The foie gras. It was my birthday and I decided to get something that was (mostly) for me. The foie was extremely smooth and rich, not a bit gritty, and came with sour cherries and–what?!–chocolate madeleines. This pairing was incredible. Like. No joke. I would eat this every day if I could.

My mother-in-law got the lobster and generously offered me a bite: tender meat, delicious vadouvan, tiny little falafel-things. Everything about this was YAS.

Finally, we ordered the 48-hour lamb as the big plate. I could have eaten duck for days (and there were ducks still available since we arrived there at the ridiculously un-hip hour of 5:45) but I would have been the only one enjoying it and it seemed a little selfish to spend $125 on something just for me. I did see it being prepared at another table, however, and it appeared to be made in a Medieval torture device. I don’t think it was missed by us, though, because the lamb was OUT OF THIS WORLD. Nothing but melting fat, sweet caramelization, tart barbecue sauce, and delicious pickles. Oh, and more bread. There’s a pile o’ lamb under all that green stuff in the pic: 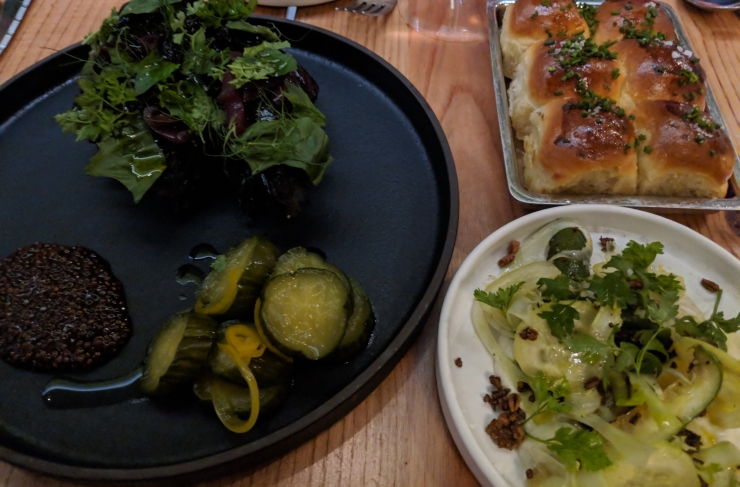 Because they overheard it was my birthday (okay, fine, because I said loudly in the presence of our server, “IT’S MY BIRTHDAY AND I DO WHAT I WANT!”), they treated us all to a round of champagne (plus a fruity mocktail for my husband’s grandma) and brought out my dessert with a candle on it:

The blueberries were so plump and sweet, accompanied by delicious, creamy custard that may have actually just been a block of mascarpone cheese. I don’t even care if it was. This was delicious, not overly sweet, and not overly large.

Bottom line: I thoroughly enjoyed this meal, but still feel like Michelin is missing something with its one-star DC restaurants. It’s not that I feel like Bresca doesn’t deserve the recognition and more that I feel that Komi, Tail Up Goat, and Plume all made me weep with joy and Bresca only had me shedding one tear, two at the most (and entirely directed at that lamb).