Spring Break staycation is a great time to try some restaurants on a Tuesday night that I’d never have been able to get reservations at on a weekend. Tail Up Goat is one of these. I knew it couldn’t be as good as everyone claimed, but this might be my only chance to try it. Earlier in the day, I was telling my cycling instructor and cycling class friends that nothing bothers me more than overpriced food. I’ll pay big money for good food. I’ll pay little money for small food. But I hate leaving a restaurant hungry and poor. I was worried that it was going to be one of those times. 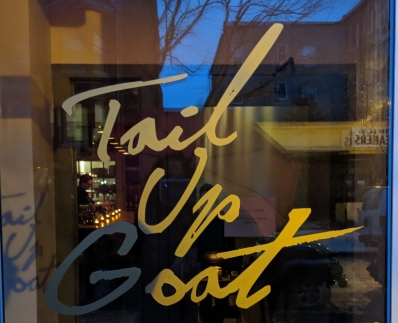 Although their beer selection isn’t stunning, they immediately impressed me just because they carried a Belgian kriek. You don’t even need to wonder if I ordered it or not, because duh. Husband ordered a Belgian dark strong (not from Belgium, but still pretty good).

Normally, I’d do all the picking at a share-plates restaurant, but since it was my husband’s birthday dinner, I was feeling generous. To my surprise, the thing he wanted most was the $14 Spanakopita focaccia. I mean, we just paid $4 for bread last Friday and spent the rest of the night making fun of Chloe for it. But okay…. The other two dishes we settled on together because we’ve morphed into one person at this point. We asked for the casarecce pasta with sherry-braised pork, as well as the lamb ribs. “We’ll just turn it into a three-course meal,” said our server. They must do this a lot.

Now, there’s $4 bread from Chloe, and then there’s $14 bread from Tail Up Goat. It’s not worth reposting the picture of Chloe’s bread. Let’s just say it was five tiny melba toast-sized pieces of regular grilled bread with a mouse-sized bowl of olive oil. C’mon Chloe, I know you didn’t expel the olive oil from the olives yourselves while we waited, why that bread gotta be four whole dollars? Now, this is what $14 gets you at Tail Up Goat: 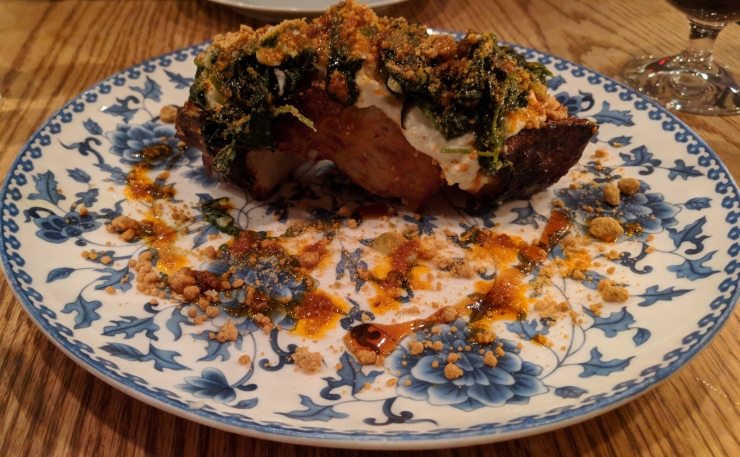 When people talk about “manna from Heaven,” I’m pretty sure that this is the bread they’re thinking of. The green stuff was kale, but you’d never know it for how delicate and wilted it was. There was feta, but this wasn’t no store-bought feta. It was creamy and melty, with only a slight hint of salt. The whole thing was dusted with those pine nut crumbs, which were so deliciously crunchy I would have been happy if they’d just brought me a bowl of that. And finally, it was finished off with a sweetness…honey? Maple? We’ll never know. But it worked. Oh yeah, and there was focaccia bread under all that. It was soft and a little oily like it’s supposed to be. On the downside, we feared that the rest of the meal couldn’t possibly live up to this.

We had a good amount of downtime to talk and imbibe before the pasta arrived. I was happy to see a sane amount of pasta with just as beautiful of a presentation as the bread: 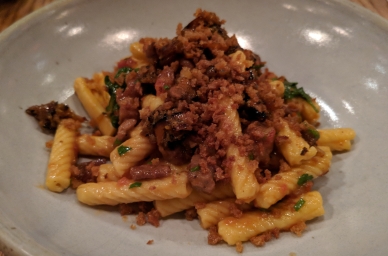 Once again, this dish wasn’t just your grandma’s bowl of spaghetti with pork. There was a nice crunch of breadcrumbs on top, plus a tang from orange zest. The pasta was a nice al dente and the pork was soft and savory. I’m afraid that it didn’t outdo the bread but it was still worthy of being ordered.

I don’t know what I was expecting from the lamb ribs. At this point I thought it could go either way. A picture is once again worth a thousand words here:

I have nothing on this plate for scale, but my immediate thought when this arrived was “I’m not going to be walking away hungry.”

It would be wrong to say that the meat fell off the bones. These ribs were so cooked that the bones fell off the bones. They were crispy on the outside, with melty fat and a molasses-y sweet glaze. There were small pieces of dried fruits and nuts scattered underneath, bathing in glaze and meat juice. I hate potatoes, but the potatoes on this plate were spicy and crispy. Barely visible in the picture are the onion zoodles marinating in yogurt and za’atar, which were also beyond delicious.

Not wanting the party to stop, we got the bitter chocolate pudding. It looks like this: 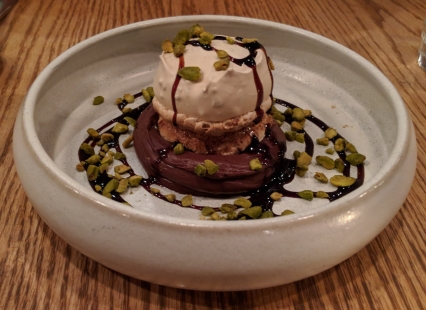 That thing on top is not ice cream, it’s a sad meringue. Quick rant: I’m pretty sure meringue exists for the sole purpose of challenging bakers to make it. Does anybody actually like it or go out of their way to eat it? It looks pretty, I guess. But it tastes like crap always and adds nothing of value to my dessert. End rant. Aside from the meringue, this was a solid but not fantastic dessert. I like dark chocolate and pistachios. Who doesn’t? But…it’s pudding. I think Tail Up Goat could have done better than this. Even they know they could, that’s why they added a meringue to make it artificially beautiful.

Price: $100 per person, including lots of alcohol.

Bottom line: Despite a fairly disappointing dessert, I was overall extremely impressed, happy, and full after finally eating here. The service was wonderful, the cooking was excellent, and the prices were high but fair. Tail Up Goat has restored my faith in expensive restaurants.

2 thoughts on “Tail Up Goat”