After passing Brick Lane a few weeks ago and doing an inadequate amount of google research, I made a Friday night reservation here. It’s important to note that when I say “inadequate amount of google research,” what I mean is that I googled the name of the restaurant, gave the menu the once-over, and determined that the food was a reasonable price and mother-in-law friendly. I also peeped that they bill themselves as “The Hottest Restaurant in Dupont Circle.” Is there a restaurant hotness certification board that determines these things? After eating here, I can say definitively: No. Brick Lane’s website also touts that they are an OpenTable Diners’ Choice Award Winner. Guys, sometimes you’re just blinded by glitter and flashbulbs and can’t see the gritty side of Hollywood.

Alright, it’s cute; I’ll give them that. It’s also tiny. But even though I’d perused the menu online, I was suddenly stricken by an unnameable fear. Something here told me that I’d just made a mistake. Perhaps it was the large number of unimaginative meal options all featuring the same vague ingredients. There was a salmon entree, a salmon sandwich, and a salmon salad. They had lemon chicken as a menu option. Lemon chicken is what your mom cooks on Thursdays because she hasn’t had time to go to the grocery store and if you don’t like it, then you can just cook dinner from now on.

We ordered drinks: as per usual, two beers, a wine, and the Capitol cocktail. I wish I could say that the cocktail was memorable, but it was watered-down and sad. I held on to high hopes for the meal. I had been promised hotness and I wanted to see hotness!

We didn’t order any appetizers because they were all boring as shit, but our entrees arrived reasonably quickly. I had the salmon sandwich I was just making fun of, my husband got the Brick Lane burger, my father-in-law got the hanger steak, and my mother-in-law had the coconut shrimp salad.

Here’s the good news first. The salmon was cooked well, the sandwiches were served on interesting buns, and hanger steak was pretty good. Here are some pictures of food: 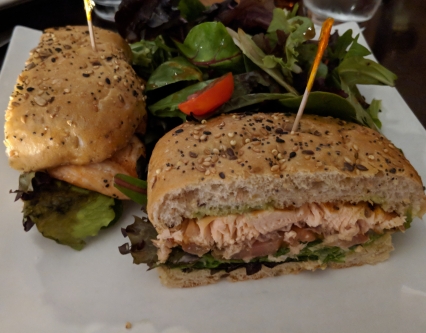 Here’s the boring news: everything. In case it’s unapparent in this picture, I ate salmon. On bread. With lettuce and tomato. The end. The hanger steak was steak. With mashed potatoes. And some grilled bok choy. If I had put this on a plate at home, my husband would be like, “I don’t get it.” I mean, it tasted fine, particularly the steak. But like my father-in-law astutely pointed out, have you ever had a bad mashed potato? Particularly unimpressive was my mother-in-law’s salad, which I take exceptional issue with because of this: the menu says “coconut shrimp.” This is not coconut shrimp. This is oily, bad tempura shrimp on top of some lettuce. Even before I tried this, I refused to take a picture of it on account of it just being some shrimp on top of lettuce. Can you picture that in your mind? Good, now you don’t need a photo. 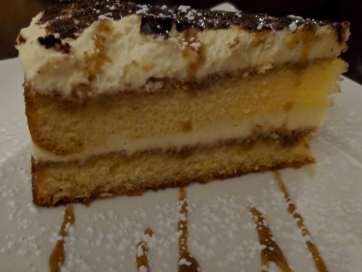 While the rest of us tried not to make eye contact with my MIL, she ordered a slice of tiramisu for dessert. It is accurately represented in this photo.

I have so many problems with this, but I’ll stick with the glaring error: I didn’t even taste liquor or espresso in this when both of those things should have been soaking through the layers of cake. That, and I’m 99% sure this came from the Safeway around the corner.

And now for the worst part of the meal: the post-meal google session. So after some cursory internet searching by a competent professional (i.e. my husband), it turns out that the so-called OpenTable Diners’ Choice Award is either:

a) a real thing that Brick Lane is falsely claiming they won, or

I don’t know if it’s better to know you’re lying, or to be taken for a ride and not knowing you’re lying. They’re both pretty bad.

Price: $30 per person. All things considered, the entrees were pretty reasonable prices. Being overpriced was not Brick Lane’s problem.

Bottom line: I’m trying to liken Brick Lane to a chain restaurant everyone knows, but that’s too hard. It’s at least one notch above TGI Fridays. If anyone has actually ever called this place “the hottest restaurant in Dupont,” it was likely to have been your weird aunt who thinks she’s really fancy and avant-garde because she added pears and walnuts to the salad one Thanksgiving.