I’ve lived around the corner for five years, so I’ve seen this piece of property change hands more than a marble in a shyster’s shell game, and I’ve seen it go from closed down, to an open but nearly-empty storefront that probably [read: definitely] housed a cockfighting ring in the back, to closed again, to a slightly less empty front that looks like it could be a money-laundering business but seems to be collectively owned by a very nice Ethiopian family. My husband and I generally refer to this place as “the Soviet market” because although they do stock a fair number of Ethiopian spice blends and some lesser-known candy bars, they never seem to have more than half the shelves full, and it’s always stuff we don’t want. I should also mention that I was once conned into buying a huge jar of Ethiopian spiced butter here that didn’t have a price tag but rang up as $28.99 (to my credit, though, I use that stuff all the time for cooking).

Now, the aforementioned nice Ethiopian family have been swearing up and down to me for at least a year that they are going to turn half the space into an Ethiopian cafe but aside from some empty fridges and day-old coffee, that plan never seemed to materialize. So imagine our surprise when, this morning, we received an email on the neighborhood listserv alerting us to their new brunch menu! We knew it was legit when we walked up and saw these Ethiopian-themed balloons.

We appeared to be the first customers. They’d decorated the restaurant space in a, let’s say, minimalist vein. The women working behind the food counter showed us big trays of their vegetarian offerings–the standard Ethiopian fare–and told us they also had tibs. We ordered both, along with a coffee. They were all set up for a traditional coffee ceremony to be held later this afternoon, so I would think that they would take more pride in their regular brew. Sidamo on H Street has totally mastered the art of good coffee for the masses. Fortunately, this cold, sludgy French vanilla nightmare was the low point of the meal. 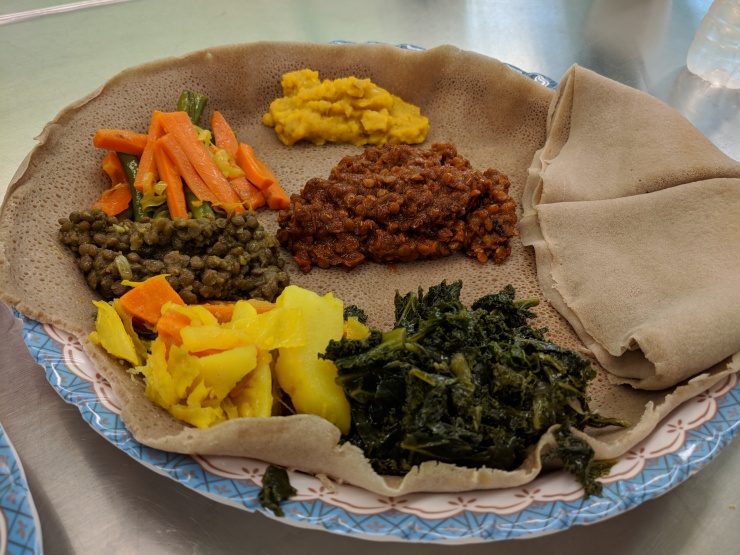 As you can see, the vegetarian platter had all the usual yums with some fun additions–carrots and green beans, and stewed kale replacing the traditional collards. And all of it was served cold (I asked one of the workers if this was an intentional choice and she responded that they had made everything last night, so…maybe?) If you are a fan of cold Chinese food or, as I have recently discovered, cold Thai curry, then cold Ethiopian food is for you! Even my husband the kale-hater liked their kale. The red lentils and yellow peas were both great, but the brown lentils were kind of bland. 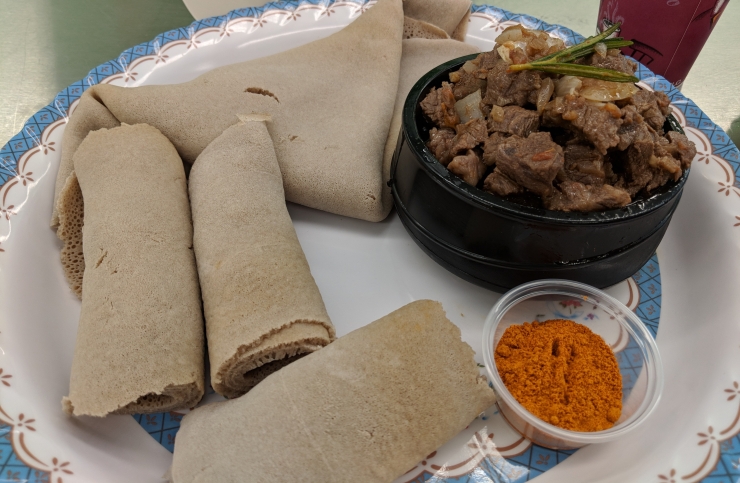 Here’s the tibs. It was so much that we took home enough for one person’s lunch tomorrow. The meat was hot and mostly cooked well, with a few very chewy sections. It was served in a bowl of oil reminiscent of Sichuan hotpot. They gave us the dixie cup full of berbere, which we fully utilized, but would have worked better had it been added during cooking. I think maybe they were trying hard to cater to uninitiated tastes but as they always say: If you can’t stand the heat, stay out of the Ethiopian restaurant.

Abem Family Deli also sells a variety of salads, boring sandwiches, and, bizarrely, tacos. Everyone knows that tacos are the official food of gentrification, so there’s some weird neighborhood stereotyping going on here. I may have to try some just to report back.

Bottom line: Abem Family Deli is not the best Ethiopian food in town, but it’s definitely the closest to me! I will continue to support them periodically in hopes of more offerings, more hours, more tables, and better coffee.