When I made my “to-eat” list for the summer, I called Old City Market and Oven “The Place Near Whole Foods” because I can’t possibly be expected to remember this long of a restaurant name despite the fact that I drive past it once a week and every time I do drive past it, I think “Huh. I should really remember the name of that place so I can go eat there.” I had to do a thorough scouring of google maps to find the right place. After a long day to cap off a long weekend, I was thrilled to see that Old City Market would deliver food to me for the low low delivery charge of $5.99. Fortunately for them, my laziness won out over my cheapskatiness on this one occasion only.

Their menu is long and varied and I thought all was lost when I couldn’t narrow down my selection past the final two dinner contenders. But then my husband said, “You choose for me. You know what I like.” Have more beautiful words ever been spoken? A more selfish wife might have ordered herself two sandwiches with little thought for her spouse. A more selfish wife could have ordered the roast salmon sandwich she kind of wanted.

I ordered the summer corn salad as a side. It sounded pretty standard but I was starving and they’re a little lacking in side dishes. For my first sandwich–I mean, my husband’s sandwich, of course–I got the skewer chicken sandwich, and for myself I ordered the pear and chorizo panini.

The corn salad was refreshing, I can’t lie. Red bell peppers and cilantro made it stand out. It was a good-size portion too, but it was nothing super innovative. 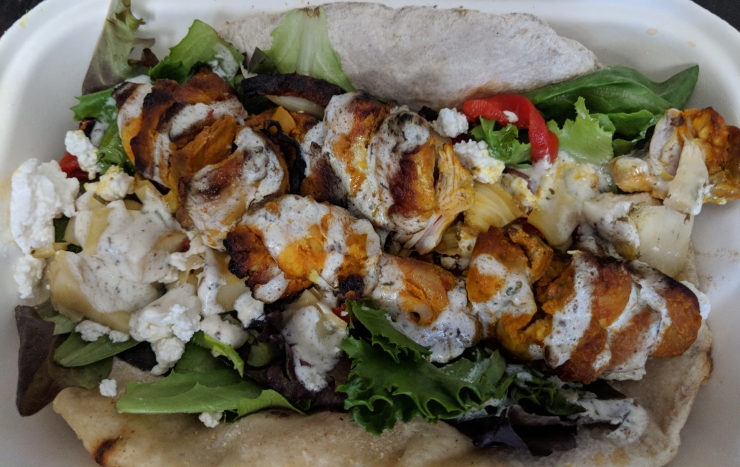 The skewered chicken flatbread was solid. The chicken pieces were moist and lightly spiced, tzatziki and feta are always winners, and the addition of artichoke hearts was mildly interesting. The flatbread itself felt fresh and homemade, with a texture somewhere between a flour tortilla and naan. 10/10 would eat again.

Now we come to my panini: it doesn’t look like much, and it wasn’t exactly what I expected, but damn it was tasty. Crispy multigrain bread held up only okay to the addition of fig jam and chorizo grease, but it had a nice texture. The pears inside were ripe and plentiful–maybe too plentiful as they kind of overwhelmed the meat. The jam was pretty sweet too. The chorizo, while not being the whole sausage I was expecting but rather thinly-sliced cured meat, was still delicious and mildly spicy. My only other commentary was that provolone was way too mild of a cheese to stand up to the other bold flavors in this. Stinky brie or bust. But for real, I wolfed this down and not just because I was hungry; it was actually really good.

Bottom line: You want some fresh, semi-creative, and reasonably-priced noms near H Street? You could probably make all this food yourself but why? They deliver.