The Eleanor takes up the first floor of one of the many ugly high-rise apartment buildings in NoMa and used to be a restaurant called Union Social. Union Social died and I said “good riddance” without even trying it. I didn’t even need to go there to know it was overpriced, generic TGI Fridays nonsense.

The Eleanor is owned by the same people as Bar Elena on H Street. This should have been my first clue. They’ve turned it into a two-lane mini bowling alley/adult arcade/tiny facsimile of Dave and Buster’s. A sign on the outside admonishes children that their presence will not be tolerated without their parents. I like bowling! I like pinball! I’m fun! Most importantly, I don’t want to be reminded that teenagers exist when I’m on summer vacation! This is my kind of place.

Their tap list is pretty nice and included solid beers from near and far, including three sours. Cocktails looked good too, and I ordered a Rosa de Jamaica. We also nabbed an order of their hushpuppies, which are served elote loco-style. They were pretty okay. Hushpuppies are more my mother-in-law’s jam. They were barely moist with lots of your stereotypical powdery parmesan cheese and some (but not enough) spicy mayo. Hushpuppies are so dippable, I don’t know why they didn’t include a dipping sauce. 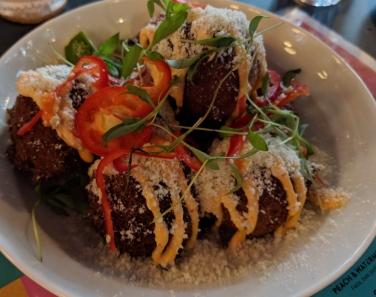 Everyone at the table received their drinks and hushpuppies and then we waited basically forever while our waitresses (PLURAL!) helped the other, like, four tables that were occupied. We had menus down. We were just talking. I was making decidedly un-casual glarey eye contact with them. I understand slow service if you’re busy, but they weren’t. Finally, we managed to summon them via Jedi mind tricks and were able to order. Here’s the only preliminary you need to know about our overall order: my husband made a big deal about ordering the chicken sandwich with fried chicken (an option that appears on the menu) and with cheddar instead of American cheese. Why is American cheese even an option at a fine dining establishment? This is not McDonald’s. A better question yet would be Why is American cheese even a thing? Four year-old me could tell that that shit is disgusting and only vaguely cheese-esque. Is this the new status quo in Trump’s America? I don’t know about you, but processed cheese product is not how I want my country represented. Alright, you got it? Fried with cheddar.

Here’s the M. Night Shyamalan plot twist: the chicken sandwich arrived and it was not fried and it had American “cheese.” Bet you didn’t see that coming! Besides the mix-up, it  was lame. The Eleanor uses chicken thigh for all their chicken needs, a bold move in our low-fat boneless breast-loving culture. I love dark meat chicken. But not when it’s full of gristle, as this was. Come on, guys. Lettuce, red onion. This sandwich was basic. 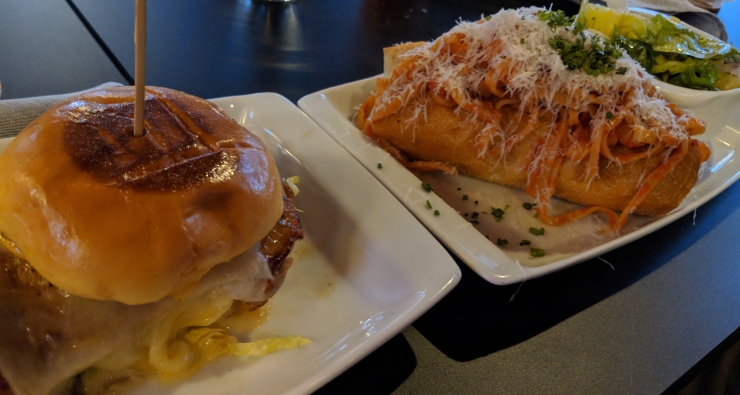 Also pictured here is my father-in-law’s spaghetti sandwich. What fresh hell is this? I think a carb-happy kindergartner may have conceptualized this meal. Worse yet: every part of this was store-bought, down to the spaghetti. My father-in-law said it best with “everything on here just tastes old.”

I ordered the tomato and kimchi salad with an addition of smoked salmon. The salmon was good, but, once again, definitely store-bought. The tomatoes were fresh too, I guess. But this was not a dinner-sized salad, nor was it even cohesive. Tomato and [a tiny amount of] kimchi is not a stretch, but then there were a bunch of pita chips topping it, like flat croutons. Except you can’t even use a fork to eat pita chips. It’s literally impossible. I just ended up pushing them to to the side because they weren’t even good.

My mother-in-law had the lobster roll and loved it. Her appreciation for her sandwich was partly a function of her forgiving and enthusiastic nature, but I have to admit that it was the best meal in our group. The lobster was tender, it had a good ratio of mayo to meat, and the bread was an appropriate medium for the food (in contrast to spaghetti, which does not require additional bread). Then we waited about twenty more minutes for the check.

“This was so good!” chirped my mother-in-law in her usual, very kind and generous way.

Bottom line: I hope one day the curse will be lifted and this location can finally have a decent restaurant. Until that time, don’t let the bowling gimmick cloud your perception of an otherwise blah eatery.