I don’t review a lot of breakfast places because I don’t eat breakfast often. But what better time to try something new than when old friends are in town? By the time we arrived, we were starving because we were stuck on Europe time after arriving home last night. I don’t think my best friend appreciated the long walk required for simple breakfast.

I thought I would just be getting my usual breakfast of iced coffee but Fox Loves Taco knows what they’re doing when it comes to breakfast and vegetarian menu options. It took me working through a lot of guilt to go with my gut instinct and order an iced honey cinnamon latte. My husband and I decdied to split three tacos: the Wham! (I was drawn in by the poached egg), the Casablanca (apricot chipotle?!), and the Chuck (because you can’t say the words “duck fat” and not expect me to come running). We ordered all of them on the house special sweet potato tortilla.

Honey cinnamon latte did not disappoint. It was like the world’s most perfect horchata. Fox Loves Taco also has horchata, so never fear, decaffeinated people! It was slightly sweet, had a good spice from the cinnamon, and was just creamy and delicious. 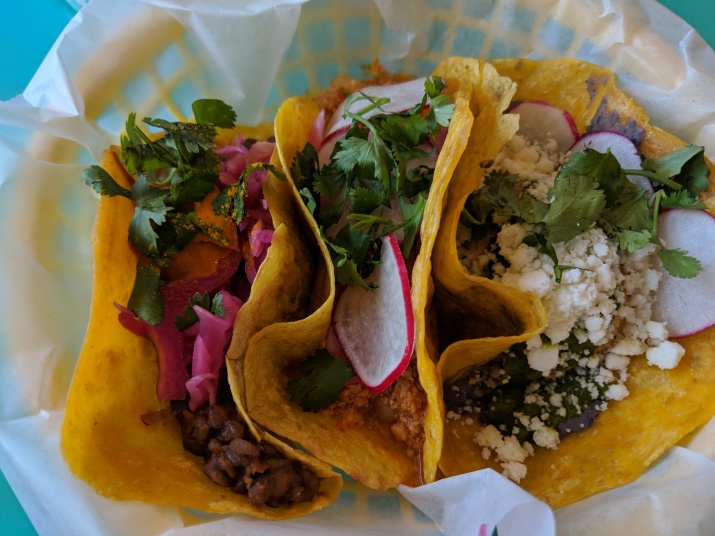 Starting with the left: the Casablanca had delicious sweet and sour cabbage slaw that complemented the lightly smoky lentils. This taco was the dark horse of the bunch. In the middle is the Chuck. I know ground chicken sucks but I expected something slightly more chorizo-y than this. It was very plain, and even the pickled onions couldn’t save it. The Wham! was definitely the most breakfasty of the bunch, and the poached egg probably would have been better if I wasn’t trying to share it and therefore didn’t end up spilling runny egg everywhere and all over myself. Sometimes I feel like poached eggs just exist for chefs’ bragging rights because nothing makes it actually better than a solid over-easy, and it’s infinitely messier. A final note on the sweet potato tortillas: the hardened and slightly scaly texture didn’t make them ideal vessels for liquidy taco guts.

Bottom line: In coffee, Fox Loves Taco receives a solid A. Food was a C/C+, overrated hipster crap, and not worth returning.