Before I begin, a warning about the parking situation here. We pulled into the lot next door, next to an abandoned strip mall. By coincidence, we parked next to my best friend and her husband, who were meeting us here for the kind of mildly-spicy and vegetable-forward cuisine that they can’t find in their native West Virginia. The parking lot to Royal Nepal is completely blocked off for no apparent reason, so we all felt it was reasonable to park in this lot despite the warnings about the enforcement of towing. We’ll come back to this later.

My friend and I both ordered the same house cocktail. I wasn’t intending to drink on a Wednesday night but you can’t put the words “walnut bitters” and “cinnamon syrup” in the same sentence without attracting me. It was, predictably, amazing. And also a little too strong, if that’s even a thing. This drink may have colored the rest of my opinions of Royal Nepal just a little bit. 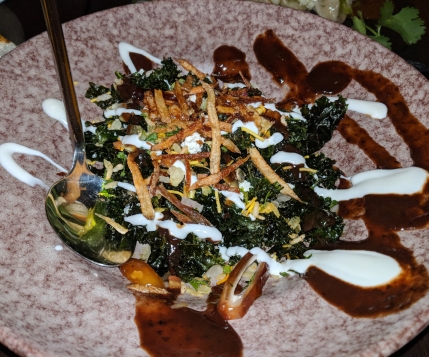 Because my best friend is a vegetarian, we asked if they had any meatless momo. Our server first responded that unfortunately, they didn’t, but after he brought our drinks out, he let us know that he had checked and the chef could actually make some. We ordered those and the yak momo because when in Nepal and also I’ve never eaten yak before. When he returned, not only did our server have the two plates of momo, but he brought us out their crispy kale dish just because. This is service that I’ve only experienced at, like, Plume and Masseria. We all wolfed this down. It was crispy and had the tang of yogurt, sweetness from the tamarind, and pungency from fried onions. I don’t go to Nepalese restaurants to order kale, but maybe I should start…

The momo were also quite delicious. I couldn’t tell you what was in the vegetable momo (I’ll blame this on the cocktail), but it was rich and soft, and they were served with two dipping sauces that were slightly spicy and tomato-y, like a Mexican salsa. The yak meat was finely minced with a mild sweetness. I could never have told you it was yak meat.

We decided to order as a group, and picked the vegetarian thali, plus wild boar curry and chicken tikka masala. Who doesn’t like tikka masala?

The thali included five dishes: cauliflower and potato curry, which was fairly mild, eggplant curry that was out of this world delicious and fragrant, a sauteed spinach that was flavorful and garlicky but a little too salty, a bean dish that reminded me of dal makhani and had a slight spice, and more of their spicy house pickles. It was served with a huge plate of rice and vegetables.

Next we come to the meat dishes:

The wild boar (right) was rich and meaty, aromatic but not super spicy, and the meat itself tasted like a leaner pork. This was an all-around crowd-pleaser among us meat eaters. The chicken tikka masala (left) was my absolute favorite, and maybe my favorite tikka masala of all time, owing to the awesome addition of anise which was not overly pungent but still brought this classic to a new plane. 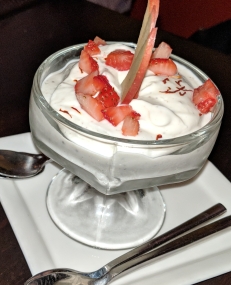 My bff is all about dessert and there was some disagreement in which I flat-out vetoed chocolate lava cake. We ordered the yogurt sikarni. It was very perfumey on account of the cardamom, and tarter than I feel like is appropriate for dessert, but it tasted very fresh and clean.

Oh–back to the parking situation. We left the restaurant to find that our cars were the only two left in the lot. “Oh, it’s just late and everyone has left already,” we said. Then we saw the guy screaming at the tow truck in the street. It seems that Royal Nepal is our lucky charm, but be forewarned: don’t park here. It may not end well for you.

Price: $35 per person for way too much food.

Bottom line: Royal Nepal falls into the category of Don’t-Pass-Up. It’s the perfect hole in the wall with all the service and interest of a fancy pants place.