I’m always down for mezcal cocktails. Throw promises of high-end Mexican food in the mix and I’ll basically sign away my first-born child. There is no better prescription for a hot Friday evening than these two things. Big ups to the weather for cooperating tonight!

Fair warning: the mezcal list at Espita is pretty intimidating. I guess I shouldn’t be surprised that this many sub-varieties and distilleries exist, but how this place has managed to aggregate all these interesting liquors is beyond me. Until two weeks ago at Mezcalero, my fairly hip cousin hadn’t even heard of mezcal at all. Fortunately for me, the cocktail list is pretty straightforward. I ordered the Snap Pea Highball, which promised to be refreshing (spoiler alert: it was!), and my husband ordered Revenge of the Estocada–basically a mezcal negroni, although the liquor used in this one was more subtle and lighter on the smoke. It was a struggle for both of us to not down these drinks in one gulp.

As per usual, we decided to split a few small plates in lieu of ordering larger dishes. In my mezcal-addled mind, this was a good way to ease the financial burden. That was not entirely what happened. In order, our share-plates were: 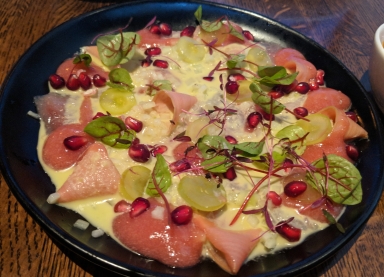 3. Tacos al Pastor: Tender pork, tart-salty watermelon, and sweet warm pineapple. This was not your typical taco al pastor but damn if it wasn’t delicious. Definitely the best part of this dinner.

4. Cauliflower: The texture of the vegetable itself was the perfect combination of soft on the inside with crispy florets. The sauce claimed to be hazelnut salsa but I’m pretty sure it was just that same cashew salsa we had as our starter. I ain’t mad, though. In this incarnation, it was almost barbecue- or teriyaki-like, and the cauliflower acted as a good vehicle for eating more sauce.

An honest question here: how have I been to two different Mexican restaurants in the last two weeks that don’t offer tres leches cake? Do you want my money or not, Espita?

In the end, we opted for liquid dessert. Our server recommended the Durango mezcal flight. Despite a mezcal list about an inch thick, somehow Espita can’t be bothered to write an actual descriptive blurb about any of them so we had no idea what we were getting. One great thing about this flight was that all three of the mezcals were very different from one another. On the other hand, only one of them was particularly good (related: I highly recommend the Mezcales de Leyenda). It was smoky, sweet, and fruity. 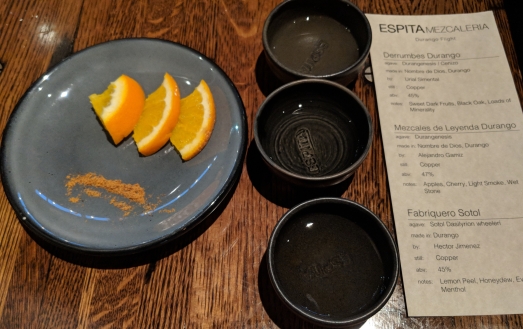 Despite Espita’s food prices–which I would estimate were about 20% higher than necessary–we somehow still managed to spend more money on drinks than on food.

Price: Even at $50 per person, you may be hungry an hour later.

Bottom line: Espita has a unique schtick and food that was interesting and good, but borders on not being worth the price. Come for the cocktails, maybe pick up a small plate or two.