I want to ask forgiveness preemptively for the absolute injustice I’m about to do Chez Dior in this description. I’ve eaten a lot of food. I’ve eaten a decent amount of African food. More than the average bear for sure. And yet I am still somehow extremely under-equipped to talk about the flavors of Senegal, as portrayed by Chez Dior. 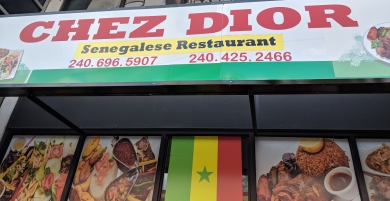 The building is unassuming. The interior looks like the inside of TGI Fridays run by religious zealot African immigrants. The owner was kind and welcoming and implored us to order anything off either the lunch or dinner menus. You know you’re in the right hole in the wall when the menu is full of typos. We wanted a healthy sampling of their offerings, plus I had already planned this meal extensively, so we ordered an appetizer, two entrees, and a side. I’ll just jump right in here.

On the left is the Accra appetizer, black eyed pea fritters with tomato sauce. This worked really well. The tomato sauce was like a delicious spicy marinara. The fritters were crispy on the outside, soft and bean-y on the inside. On the right was my entree selection: Ndole with plantains. The greens were very bitter (as advertised) but also had an interesting depth. Buried under all that green is a large hunk of lamb, some of it tender. The plantains were not like typical Latin-American twice-cooked sweet plantains but more bitter, drier, and starchier. 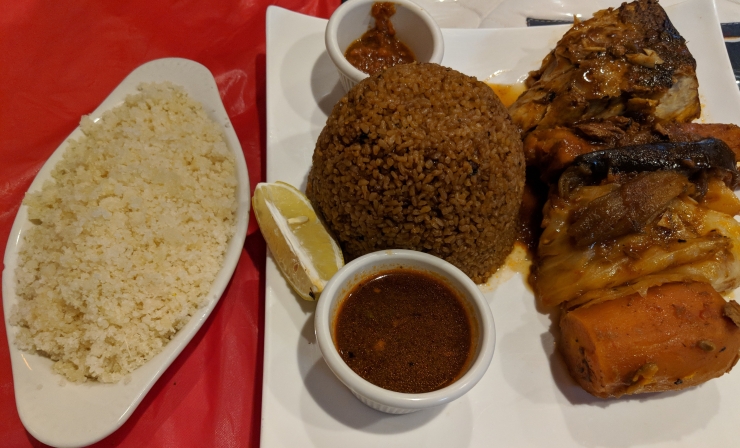 On the left here is the athieke side. I learned from Wikipedia that it’s a staple side in Senegal–basically couscous made from cassava instead of wheat–and I couldn’t pass it up because it’s such an interesting study in human geography. After I took the photo, the owner came back to deliver a spicy vinegar-cucumber salsa to go on top of it, which dramatically elevated it from plain couscous to saucy couscous. On the right is my husband’s dinner selection: the red and white fish. The jollof rice and the accompanying hearty sauce were great, and as I’ve stated many times, I believe that rice is a lame excuse for a carbohydrate. The fish was the star–a meaty white fish with a rich, almost beefy sauce. The vegetables with it were good–some boiled cassava, cabbage, and basically an entire carrot.

We asked for boxes to take home our leftovers and couldn’t even fit all the leftovers inside. Our table looked like a hurricane of rice and rice-like things had just blown through.

Price: $20 per person, with leftovers for days.

Bottom line: If you want to try something you’ve never had before, or you want to fill your plate with an inexplicable variety and excessive amount of carbs, Chez Dior is for you. Fine dining it is not, but it is a hole in the wall like none you’ve tried before.