Anybody in my immediate family will tell you how relentlessly I used to make fun of H Street. How anytime it was mentioned, I would squawk, Regina George style, “Stop trying to make H Street happen!” More and more restaurants are proving me wrong, from Le Grenier to Queen Vic (but not Big Board. Never Big Board).

Unfortunately, Sol Mexican Grill (not to be confused with El Sol in Logan Circle), is basically the Gretchen Wieners of H Street. For what it’s worth, this restaurant has a fast-casual joint downstairs and a sit-down section upstairs. It’s possible that the fast-casual part is alright, perhaps even good for what it is. But almost from the get-go, the sit-down section was an abomination. 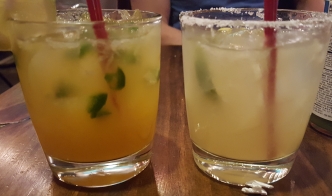 Drinks: I had the spicy mango margarita (left), my husband had the Patron margarita. This was the first–and last–thing that wasn’t a complete disappointment. For a “spicy” margarita, this was bad. But for a weekend-starting sugar drink, I guess it was okay. The Patron margarita was solid, though, although these are the smallest glasses of rail liquor to ever cost $11. I’ve adjusted the size of this photo to reflect the actual size of the glasses.

After pigging out on Peruvian chicken for lunch, I wanted something small and was leaning towards tacos but they didn’t look particularly interesting, so I went instead with the trio of enchiladas. 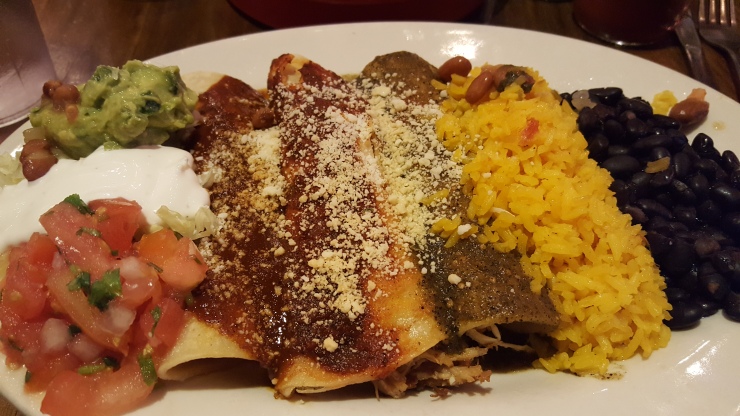 From left to right, these are beef with mole sauce, pork with red sauce, and chicken with salsa verde. Then there’s some yellow rice that I didn’t eat because it would have been a waste of my time, and some black beans that came straight out of a can. Of the three enchiladas, the beef was the only one worth eating. The mole was smoky and…that’s about it. I like beef, I guess? All three meats were dry, an amazing feat since I’ve never seen someone fuck up pulled pork, and there was no sauce or anything else to speak of inside the enchiladas. I didn’t finish any of these. I was hoping to have a lighter dinner, so I guess Sol helped me accomplish that by giving me food so shitty that even I didn’t want to eat it.

This brings me to my poor husband. He ordered the parillada sol. He’s working out a lot and trying to do a lean bulk, hence the desire to pay $26 for a metric fuck-ton of protein. Unfortunately for him, this meant that he now had to finish this enormous plate of second-rate food: 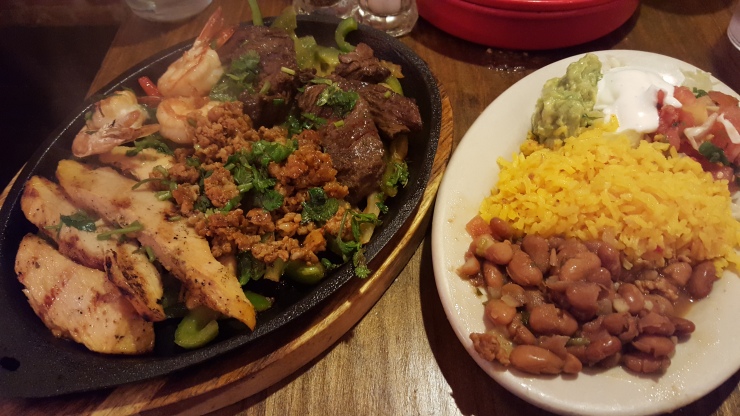 On the left: rubber chicken, meh shrimp, ground pork that Sol would like to pass off as “chorizo,” and some overcooked skirt steak. On the right: more shitty accompaniments. Not pictured: tortillas that also clearly came out of a bag. I would like to dwell for a moment on the so-called chorizo. Because it’s actually making me angry that someone thinks they can sully the good name of spicy sausage with some over-salted, greasy pork crumbles. Like, for real.

This place was so bad that we actually passed up an advertised tres leches cake, something I have never done in my entire life.

Looking around, the majority of Sol’s patrons were Gallaudet students, which I can understand. It’s close, and this restaurant took me back to my days as an impoverished college student when my whitebread boyfriend and I would hit up Chili’s for a night of splurging. All likeness to Chili’s abated when we got the bill, though. $77 for this crap?! Regina George was an asshole, but she was right; Gretchen needed to shut up already about “fetch.”

Price: $40 per person, an hour of your life, and your dignity.

Bottom line: Listen, just don’t come here. There’s no excuse. If you want Chili’s, just go to Chili’s. Here’s a map to show you how to get there instead: