The hubs and I were hoping to avoid a big Valentine’s Day to-do by circumventing the actual holiday itself and going for something a little cheaper. Turns out that “little” would be the operative word here.

We just returned from a trip to Belgium about a week ago and you’d think we’d be sick of sour beers and mussels. You’d be wrong. Especially since, sadly, The Sovereign’s food is far superior to anything we ate when we were legitimately in Belgium. Then again, that wasn’t exactly the point of the trip.

If you haven’t been there yet, please just ignore their craft cocktails, wines, and giant pitcher o’ absinthe. You’d be doing yourself a great disservice to not get anything from their carefully selected draft list or, if you’re so inclined, to get a bottle of authentic Belgian gueuze (at an enormous markup, I might add, but still so worth it). They even serve the gueuze the Belgian way–in a basket! See? They know their shit here. (Side note: I highly recommend Drie Fonteinen as a general rule).

We couldn’t agree on an appetizer. My vote is always for bitterballen, a Dutch specialty that is basically chipped beef that’s been fried. But the husband isn’t crazy about it. We argued about salads but eventually settled on the Saucisse Ardennes. I was thinking it would be more like regular sausage, but it was a dried salami-like product. It was well-seasoned and very tasty after we requested some mustard to go along with it.

For the entrees, I had the rabbit in kriek (had to), and my husband got the carbonnade flamande. 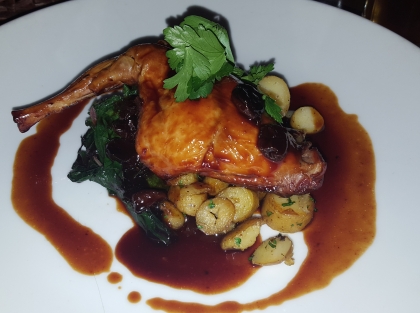 Rabbit: yum! Crispy skin, tender meat, baby potatoes, and braised swiss chard, all set in a delicious, not-too-sweet kriek beer sauce (kriek is cherry-infused sour beer, for the uninitiated). The potatoes were soft, and the chard was cooked past bitterness.

The carbonnade flamande is a fall-apart chunk of short rib, wrapped in thin pastry, and accompanied by mashed potatoes. The meat was incredibly flavorful and herbal. This was the ultimate meal for meat-and-potatoes people.

Finally, we ordered one of Sovereign’s several dressed liegeois waffles for dessert, because we unfortunately and inexplicably didn’t eat a single bite of waffle in real-life Belgium. I wish Sovereign had a wider variety of fun waffles since a few of them were fairly basic, but we ended up with one topped with cherry compote, pistachios, and chocolate chantilly cream.

I mean, it’s a waffle. It was an appropriately-sized dessert, which was good because we  were two bombers of heavy beer in at this point. Liegeois waffles are made of a heavier yeast-based batter than Brussels waffles (the Belgian waffles we all know and love) and it has more of a cakey texture. The chantilly had a good hint of chocolate. It was a good combination of flavors, but a fancy place like this could do better in the creativity department.

Price: Varies widely with what and how much you choose to drink, but I will divulge that we spent around $100 per person. However, we also spent more money on alcohol than we did on food (aka winning. For explanation, see: El Rinconcito), so our experience wasn’t necessarily typical.

Bottom line: The Sovereign will never fail to make me happy with their fresh take on sometimes-weird Benelux cuisine (ahem bitterballen). They are a perennial favorite.

2 thoughts on “The Sovereign”