After last week’s sad case of mistaken identity regarding Fat Petes’ applicability to non-drunken situations, and also after last night’s more-expensive-than-we-thought dinner followed by a more-expensive-than-we-thought impromptu trip to Jack Rose, we were eager for a delicious but cheap meal tonight. All of my suggestions were vetoed, but my wonderful husband came upon Duke’s Counter in Woodley Park.

From the get-go, nothing about this was as expected. First of all, it appears that their employee uniform consists of some blue plaid shirt (you can see an example in the picture below!). Secondly, for a place that claims to serve British food and tries to design itself as a London pub, this place has a menu that lacks the heavy bread, meat, and fried dishes typically associated with British “cuisine” (if you can call it that) and instead they serve only gourmet sandwiches preceded by craft and imported British beers and original cocktails. I don’t know about you, but I’ll take a banh mi over blood pudding any day. I ordered the Proper Pimm’s cocktail and my husband ordered one of several microbrewed porters on draft. My cocktail was fabulous. I’m a major sucker for spicy drinks, and the ginger beer paired well with the chili flavoring, like a spicy Dark and Stormy. 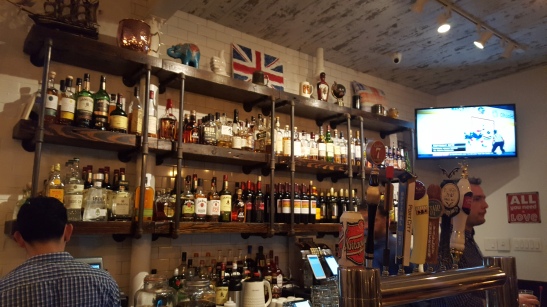 We had a hard time with the appetizer round. There were a lot of interesting things listed but we were trying to keep it cheap and light. Turns out we shouldn’t have been concerned with that….BECAUSE NEITHER THING WAS POSSIBLE. We ended up ordering the spicy hummus. How could hummus possibly cost $11? This is why: 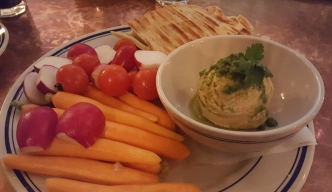 It’s like the entire produce department at Wegman’s with a baseball-sized ball of hummus, which was a miraculous blend of creamy hummus and chimichurri. The naan had the texture of a memory foam pillow and was so warm and soft that it was hard to stop. Sadly, I didn’t get to finish my carrot binge because our sandwiches arrived.

When I had ordered my sandwich, the El Trasero with a friend egg on top, our server said, “Huh. I’ve never had someone order an egg on that sandwich before.” Then I felt weird. Why did he tell me that? Was he trying to discourage me? I felt defensive, like I had to back up my menu selection. I doubled down on it. I’m glad I did. 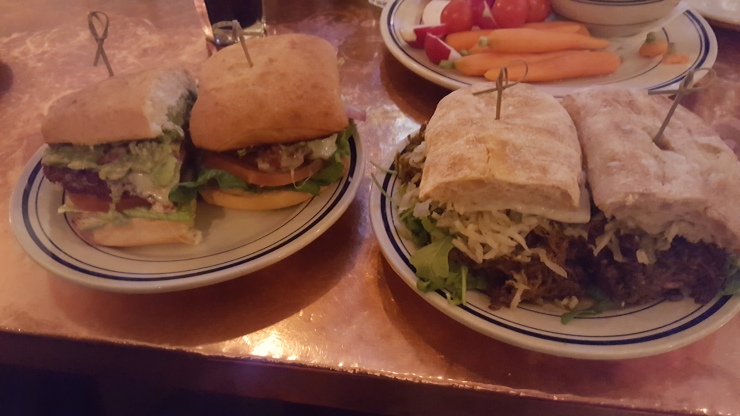 El Trasero is spicy pulled pork with a tart, crunchy celery slaw and arugula, served on a ciabatta roll. From the first bite, it was heartbreakingly good. And you know what? The fried egg was perfect on it, so fuck that plaid-shirted naysayer. I let him know he was wrong.

My husband had the cubano, which was surprisingly cheesy, topped with creamy avocado, and filled with perfectly cooked, thin-sliced chicken schnitzel. Despite the absolute deliciousness, we both had trouble finishing just the first half of our sandwiches, and we packed them up along with the rest of the crudites.

Price: $30 per person, but you’ll have lunch for the next two days.

Bottom line: Duke’s Counter is a winner. Next time we are painting pottery, we will forego Fat Pete’s in favor of this place, which is just down the street. I can’t even imagine how good this would taste if I were drunk.

Special thanks go to my husband, without whom I would have never tried eating fried eggs, much less putting fried eggs on my sandwiches. He’s also responsible for introducing me to dipping my fries in mayo. Thanks, babe. You da best.

Sunday update: Just ate half of my leftover sandwich. Goddamn, that sandwich was good.