Man, I felt super poor walking into Palmer Alley, the weird upscale pedestrian mall where Fig & Olive DC is tucked away. I mean, I was wearing a skirt that I bought at Goodwill for $7 and a pair of Target sandals. I put the good in Goodwill, but still. Walking through the revolving door was like stepping into a Williams Sonoma catalogue.

The downstairs is mostly bar with a happy hour crowd, so we were seated upstairs. The beer list was a little [read: extremely] sad, but the cocktails looked great, and I had some trouble deciding because there were so many great options. I got a Provence Margarita and my husband got the Julep. They were both fresh, flavorful, and served fast. Plus, this place really lives by their name, and the julep was served accordingly with a fresh, speared fig. I also thought that $12 for a cocktail, while ultimately a little expensive, is par for the course in DC. This is a known fact.

We ordered six different crostini so I got a nice sampling of the octopus (slightly fishy, slightly chewy, still great smoky flavor), the manchego (yum, fig jam! Maybe too much fig jam…nevermind, that’s not a thing), the prosciutto (more fig jam!), and the daily special pata negra with tomato (definitely the winner–slightly salty with savory tomatoes). 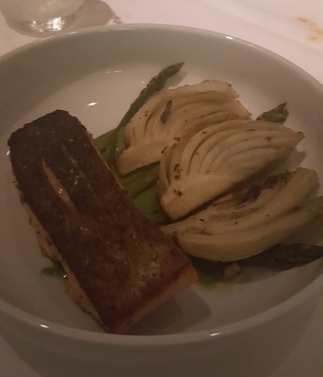 Then, the main course: I ordered the salmon, which came with asparagus, pea puree, and fennel. The skin on the salmon was wonderfully crispy, the salmon just slightly more than the medium I ordered. The asparagus was also perfect, but there wasn’t a whole lot of it. My main issue was the explosion of fennel on this plate. It was gorgeous, but ain’t nobody want to eat an entire fennel bulb with nothing else. I mean, I still did. For science.

My husband had the chicken tajine [sic]. I’m a big fan of the tagine concept. I have weirdly both owned a tagine pot and gifted one to a friend. If you are not familiar with this concept, it’s basically the least useful, least durable Dutch oven that has ever existed, but damn if it isn’t a pretty way to cook things. So I’ve made a tagine or two in my day, and let’s say that what my husband got was less of a tagine and more of a…thin soup? Without a spoon? And couscous on the side? It had some uncut vegetables, which was nice but inconvenient, and the highlight was definitely the harissa, pimenton, and toasted almonds served on the side, but there was no clear way to eat this dish, so he struggled with how to consume the bone-in chicken and where to put   the sauce, etc. In retrospect, maybe the couscous was supposed to go in the soup? Unclear. He describes this dish as a “standard chicken dish that was hard to eat.”

One nice thing that Fig & Olive does right is that they offer an $8 dessert consisting of a cup of coffee and a tiny bite of one of their desserts. I appreciated the fact that I could order the actual correct amount of dessert and also not have to agree on what to get with anyone else, because my mother-in-law always wants dessert, but she is a monster who doesn’t like cheesecake, so really why did I ever agree to marry into this family?! Anyway, I got the cherry crostini. It consisted of nicely crumbly shortbread covered in creamy mascarpone, pistachios, and two tiny liquor-soaked cherries. It was a highlight of this meal, but it was still not anything special.