Queen Vic is another one of those restaurants that used to be in the regular lineup and then got booted when I suddenly became obsessed with going to a new place every single week. It was time to give it another try.

Their draft beers are mostly standard, bland British things like you would be unsurprised to find in whatever pub in actual England, and most of their cocktails are beer-based (an interesting concept, sure, but not one I was interested in). I ended up ordering a bottle and when they didn’t have my first choice, ended up with this monstrosity:

I only call it a monstrosity because it was huge, almost bomber-sized. Have you ever tried to drink 20 ounces of dark, rich chocolate stout by yourself? It’s tough. But this one was pretty good and not super high alcohol; more of a bittersweet dessert than anything.

We toasted the weekend and then set about ordering food. We couldn’t get past the Devils on Horseback, which I guess is a thing? But if you’ve never heard of it, as I hadn’t, it’s a cheese-stuffed date that is then wrapped in some sort of meat–usually bacon, but in this case prosciutto.

I might be weird but I LOVE dates and I LOVE cheese-stuffed dates, a specialty I often bring to work potlucks and which my friend Jody calls “candy cheese.” The meat here added another level of crispy, saltiness and created a different beast than the one I typically produce. In this case, I think Queen Vic’s would have been better without the mustard. Love me some whole grain mustard in general, but it’s a super strong flavor that totally overpowered everything else. Sometimes, something is so perfect that it can’t be improved on.

I ordered the goat cheese salad with chicken.

It was huge. I have never before brought home half a salad to eat for lunch the next day, but this was massive. The chicken was moist and tasty. The rest just had too much going on. Why did I need strawberries and grapes, pine nuts and croutons. I didn’t need to eat the entire food pyramid in one sitting. Then again, maybe I’m just projecting because I recently read an article about making perfect salads.

My husband got the seafood pasta, out of character for him in a number of ways but sure, okay. 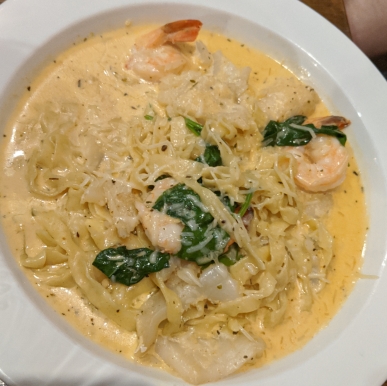 It smelled like the ocean in a bowl. I wish that sounded more appetizing; it really was quite tasty but definitely a dish for seafood lovers. Excellent, al dente pasta, and although the sauce looks super heavy and creamy, it was actually much ligher tasting and super peppery. This dish also made it to lunch the next day.

My father-in-law decided to treat himself with the veggie gnocchi, which was definitely the winner. Herby pesto, roasty veggies, soft gnocchi. Delicious.

My MIL was there, too, I swear! I just neglected to photograph her food. She got the fried chicken BLT despite not liking bacon–the rest of us hyenas at the table gobbled up the giant slab of smoky-sweet pork belly that came with it, but didn’t really try the chicken sandwich itself. I can testify to its hugeness, though.

Bottom line: Queen Vic is not GREAT but it is SOLID bar food, probably better than anything you’d get in England, wayyyyy nicer staff than anywhere in England, and probably the best price per cubic inch of food you’ll find in most DC establishments.