It’s been a hot second since I had time to update. This week for Family Fun Friday, the fam came up to meet me for a late dinner in Silver Spring at the iconic Mrs. K’s. The fun started with it being nearly impossible to find a parking spot. “How are there this many people here?” we wondered. The cottage looks tiny. It wouldn’t be long before we found out…downstairs is a maze-like cavern, complete with original wooden rafters and actual bedrock. This place is legit and it’s easy to see why it’s been around since 1930. The whole basement was hopping and Friday nights come with a live pianist. “Hey, look! We’d fit right in at this bar!” remarked my father-in-law, who is always lamenting being the oldest person in the bars he frequents (interpret this as you will).

We orderd a bottle of Malbec and some deviled eggs after an apology from the bartender who was also responsible for waiting basement tables. I feel for this guy; I didn’t see him take a moment of rest the entire night. But that said, it was 20 minutes before anyone showed up with the wine and at least 30 before the deviled eggs arrived (and we had to remind someone to get them). It was not until this point that we even ordered entrees.

The wine was flavorful and fruity but didn’t have a lot of body. My apologies for neglecting to take a picture of the deviled eggs but they got devoured immediately since it was past 8:00 at this point. They were, however, fantastic, with a creamy filling, smoky bacon crumbles, and a tart, briney flavor from the pickled jalapeño on top.

We twiddled our thumbs a while longer while we waited for our entrees. We ordered another bottle of wine–another malbec. I returned from the bathroom just as the server was pouring everyone a glass of the new wine and exclaimed, with absolute conviction and wine-drinking authority, “Mmmm! So different than the other one!” Twist: they were out of the other wine so I was drinking the same one and now I can never show my face there again.

I had the duck breast, of course. The romesco sauce was more tomato-y and less smokey than I’m used to but still solid, and the duck, despite being far past medium-rare and over-salted, was still pretty tender. It’s a prime example of the word okay. 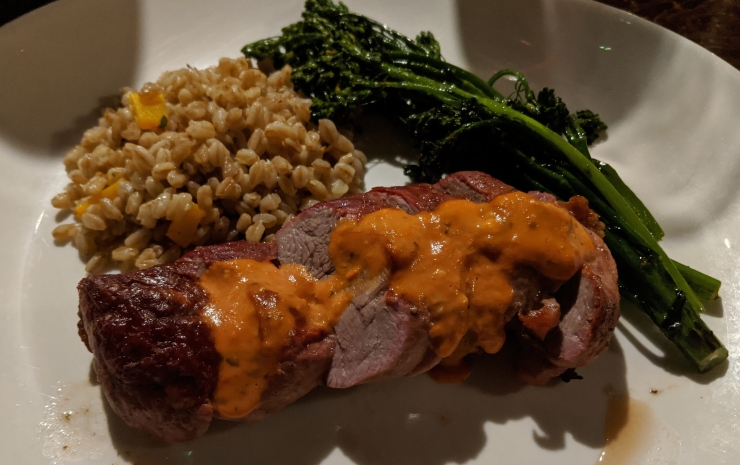 My husband ordered the short ribs. It was tender and beefy. Your standard braised short rib stew with the usual accompaniments including criminally overcooked carrots.

My father-in-law had the beef tenderloin. Unlike my duck, his was ordered medium-rare and came on the side of very rare. Not bad, in and of itself, but something to be aware of. The potatoes on the side were very crispy, and I’m not even a potato person. Why do traditional restaurants always do this thing with the three stalks of asparagus? I know that putting odd-numbered things on the plate is a thing but why three? That’s like the minimum number of asparagus spears that a frustrated parent makes their toddler eat before the toddler can leave the table. That is not an appropriate amount of a vegetable for an adult. Come on, Mrs. K’s. Potatoes are not a vegetable.

My mother-in-law’s meatloaf was far and away the winning dish of the night. It was so fragrantly-spiced with a flavorful mushroom gravy. It was the ultimate comfort food and definitely not your mom’s nasty ketchup meatloaf. It came with an adult-sized portion of green beans. 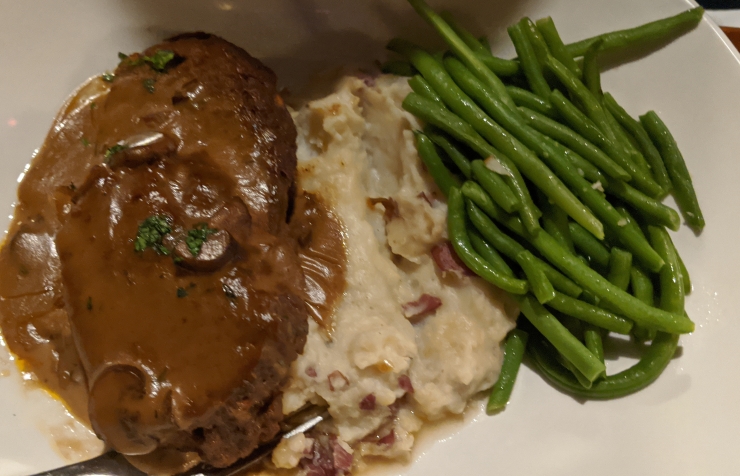 Now it was 9 o’clock. We were just finishing dinner. The piano player shut down and came over to talk to us. The entire basement cleared out and we were one of two tables left. “Are you guys closing down?” we asked the server and he confirmed. A restaurant that closes at 9? This isn’t some Midwestern cow town, either, it’s goddamn Silver Spring. The outdoor fire pit was still roaring, the basement cave only gets better the later it gets, and they close at nine? Is the original Mrs. K still alive and making all the food and they need to shut down so she can watch Matlock?

Bottom line: Food gets a B, service gets a D-, but basement atmosphere is, at least on a Friday night before 9, an A+.