After several recent, notable failures, part of me just wanted to call it quits and go to Huacatay for a cheap but satisfying box of chicken, but a quick search turned up one new result within walking distance and I reluctantly pitched the idea to my husband. I was not really in the mood for Mexican and don’t usually like Tex-Mex as a general rule, but I really wanted to sit down and I really wanted to walk, so it checked those boxes.

Half a block from Big Ben liquor store is not exactly where I’d choose to open a trendy Mexican restaurant but if this means that we can have more margaritas and fewer shootings, that would be win-win.

They don’t take reservations, and we luckily arrived at the very beginning of a rush. The space is small and it was positively teeming with babies. Seriously, babies everywhere. Something about free chips and salsa must act like a magnet to small children.

Republic Cantina has a long list of margaritas and other house cocktails that are all a very reasonable price. I ordered the spicy margarita and my husband got a classic, substituting mezcal for the house tequila. I am pleased to say that they were both delicious–a good level of spicy in mine, and delicious, smoky lime in my husband’s.

To start, we ordered the watermelon salad, which we thought would be nice and refreshing, and a good contrast to the dense entree options. I ordered the chicken enchiladas, and my husband got a fajita platter with the brisket sausage and pork shoulder.

Due to the rush of customers, we ended up receiving all our food at the same time, but this wasn’t a big deal other than not having much space on the table for all the dishes. The watermelon salad was indeed very refreshing, cold, and deliciously sweet. Maybe slightly overpriced, but after the previous night’s meal at Thamee, I was willing to overlook a small discrepancy in value.

My enchiladas were hands-down delicious. The salsa verde had a slight tang, the chicken inside was moist, and the tortillas fell apart. It was a good value too–I ate two of the three enchiladas and brought the third one home.

My husband’s fajitas were a similar story. A moderately hefty pricetag, but enough food for multiple meals. The brisket sausage was very smoky and the pork, though plain, was a perfect representation of itself–just porky pork with nothing to cover it up. These two, and roasted veggies, were served atop grilled Oaxaca cheese, pretty much the best invention since cheese was discovered in the first place. 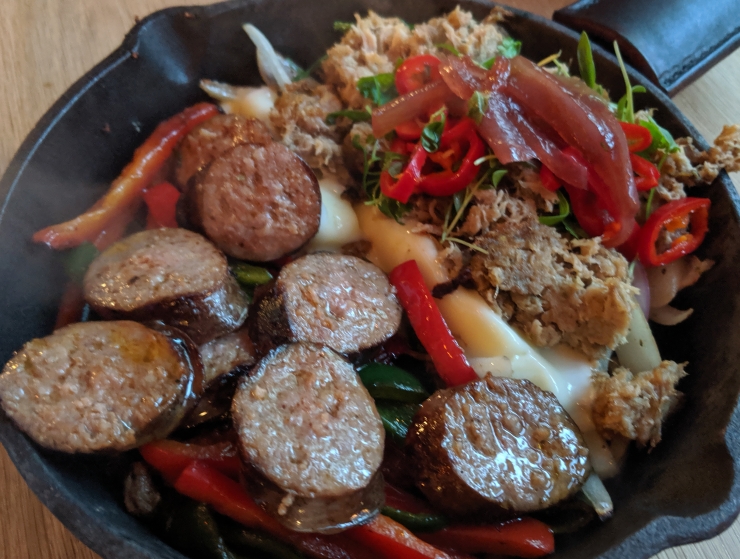 Best of all, Republic Cantina offers a variety of esoteric, mezcal-esque liquors that we were excited to try for the first time–sotol, raicilla, and bacanora. We intended to try just two, but were convinced to do their adventurous flight by our server, who also happened to be the bar manager. All three were so different but so quality. They also included housemade chapulin salt and threw in two whole crickets, which my husband and I naturally clinked together as a cheers.

Price: $50 per person, including a lot of alcohol.

Bottom line: I’m going to come back here with literally everyone I know. You’re welcome, people. I don’t remember the last time I was happier with a new restaurant. P.S. We ultimately spent $48 on alcohol and $47 on food, so we technically won.