When I found out that Local 16 specialized in both Afghan food and pizza, I knew it would be perfect for a Friday night family fun night, which is always made 10,000 times easier with the addition of pizza. I made a reservation on Thursday night and every timeslot was available for Friday. Their subsequent text message to me warned me that everyone in our party would need to be 21 or older and that there was a two-hour time limit on tables. Awesome, and no problem!

The first thing that was advertised to us when we arrived was a hot apple cider cocktail special for $6. Hell to the yes. My mother-in-law and I each got one of these, my husband ordered a Burro, and my father-in-law got the Ken-Tuck. The cocktails were not super interesting but were still pretty good, especially considering that Local 16 runs happy hour until 9 p.m. every night, so they were $6 each. You can’t beat that. They were served in plastic cups like we were at a toddler’s birthday party, but whatever. For $6, I’m willing to forgive a lot. 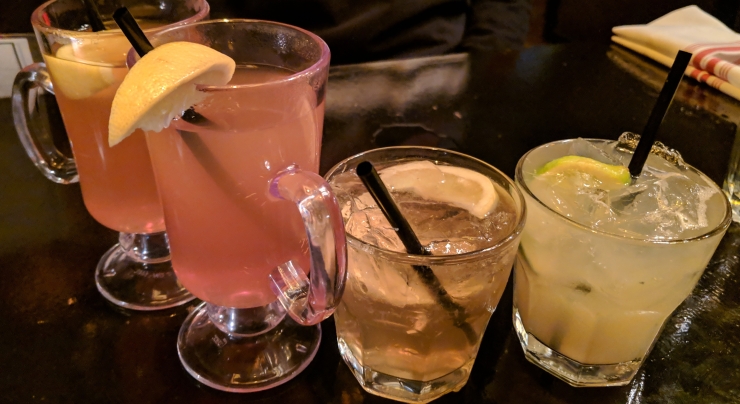 Food ordering went basically the way I had planned. My mother-in-law went out on a limb and ordered…a pepperoni pizza! With extra cheese, because she was feeling crazy. Our server assured her that the pizzas were fantastic. I ordered from the Afghan small-plate menu for the rest of us: the borani kadoo, fried aushak, chicken kabobs, and spiced beef sliders. I knew the plan was going to slide downhill when our server came back to ask which “bolani” we wanted. How many people are ordering off the Afghan menu if the waitstaff don’t even know what’s on it? At this point it was 7 p.m. and we were the only group in the restaurant, so maybe a better question is how many people are ordering here at all?

After confirming, we were served the right thing! Hallelujah, too, because Afghan pumpkin is one of my favorite things. It was the first thing to show up too: 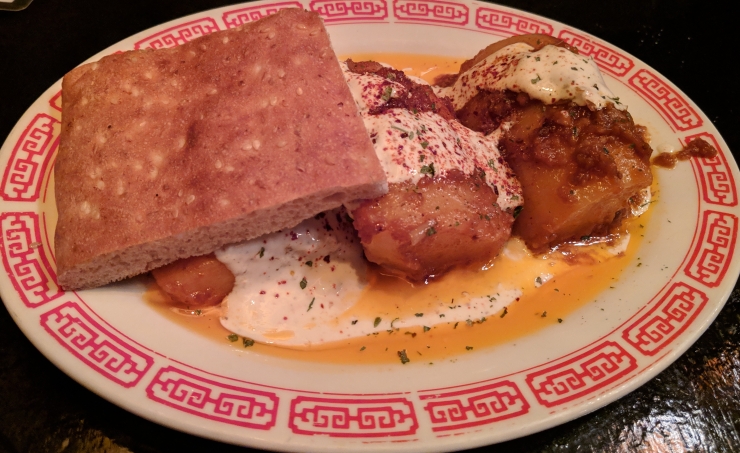 It was tender with a tart yogurt sauce but not a whole lot of flavor from the pumpkin or tomato, which is usually sweet, thick, and fragrant with spices.

The sliders were underseasoned, dry, and didn’t really taste like much. They were a little spicy because they were topped with slices of raw jalapeno.

Aushak dumplings and kabobs came next. Both were served with the same mint sauce. The kabobs were much better than anything else we’d gotten so far–the chicken was really tasty and even the rice was good. Raisins were a nice touch. There was plenty of food on the plate too. The dumplings were fried up nice and crispy, but there was almost no leek filling to balance out the bready outsides. They came with more mint sauce. 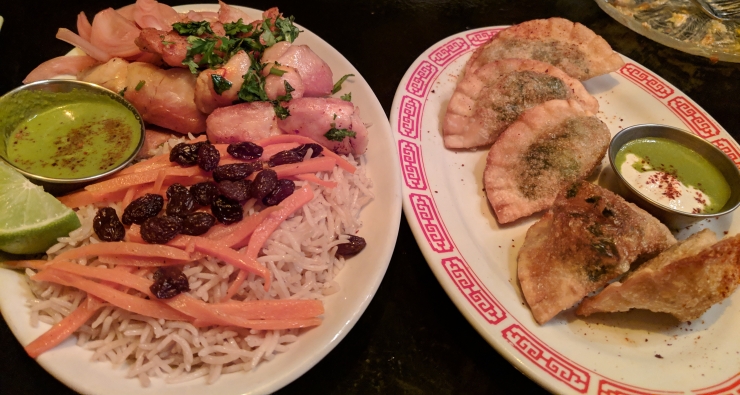 At this point, we were picking at the traces of rice on the plate and I finally asked the waiter if he had an ETA on the pizza. “Oh, I’ll be right back with that!” he said.

15 minutes later, the pizza arrived. So…you forgot the pizza that you talked up. And then lied and said it was coming. When you had literally zero other tables to help. Okay. 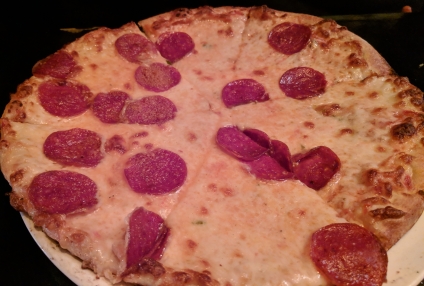 Here’s the pizza. It tasted fine, but I have a sneaking suspicion this is not homemade. I beg you to study the picture of this pizza hard and give me one good reason why you think it’s not a frozen pizza. I’ll wait.

On the bright side, we had lots of $6 cocktails to keep us busy.

Bottom line: This review is proof that the whole of a restaurant can be greater than the sum of its parts. Or maybe it’s proof that I’m a bitch. In the moment, everyone felt okay about it. Now I’m kinda pissed. Only only come here if you want to get super drunk for very cheap.