“Find us something cheap to eat for dinner that’s in Union Market or H Street,” I said, leaving my husband at the helm of dinner plans for the first time, like, ever.

“Hear me out,” he responded. “Let’s give Big Board another chance. It’s cheap, we haven’t had a burger in a while, good beer despite their stupid price-changing gimmick.”

I agreed. That was my first mistake.

On a cold Saturday night with football on TV, there were seats a-plenty down at Big Board. The price ticker was listing draft beers a WHOPPING 35 cents below market rate (WOW!) It was slow with a capital S. My husband ordered an Old Rasputin on draft and I ordered the bottle of Breckenridge vanilla porter, one of my all-time favorites. I have to commend them for offering both of these beers, but when my bottle arrived, it was glassless, and even after asking for a glass, our server decided to stand around playing with her phone and chatting with the bartender instead of bringing me one.

We started with a big salad, which we shared. It was a good size but was beyond boring. Also, I could never truly figure out what the salad dressing was, but judging by its viscous texture and sharp flavor, I’m fairly certain it was balsamic vinegar mixed with mayonnaise, which is…not salad dressing. Or, at best, it’s not a salad dressing that you should be serving if it’s not the day before grocery shopping day.

I got the Port d’Amsterdam burger and my husband built his own from their selection of toppings. We both ordered medium rare, the dagger that had landed Big Board on our “Banned Restaurant” list in the first place. They were both delivered perfectly medium-rare, I will give them that. So it’s pretty regrettable how still just not good the food was. 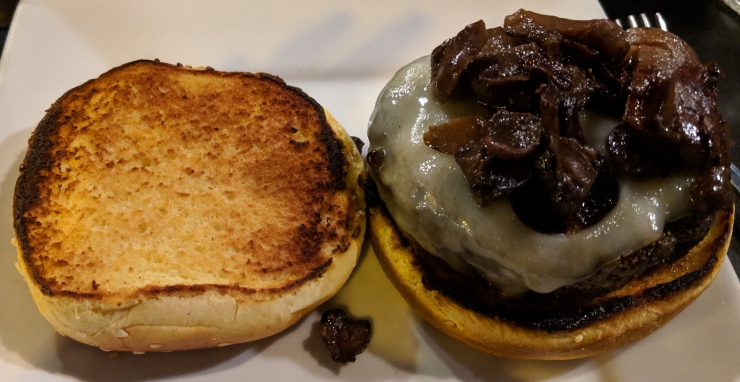 It’s got cheese, it’s got mushrooms, it’s a burger. I guess I got what I ordered? They brought me a little ramekin of mayo when I asked. Perhaps I could have ordered some additional add-ons if I wanted something fancier, but if you’re a slightly upscale burger restaurant, I think that the responsibility for inventing combinations should fall on your shoulders, not the customer’s. Mustard or sauerkraut would have been a natural choice for them here. But no. Meat. Cheese. Mushroom. Bread. Stupid. On top of that, the meat itself was very under-seasoned. It wasn’t as big of an issue for my husband since he had some other elements (namely bacon) to add flavor, but on this boring-ass burger, you could tell that it was bland. The only thing that saved it was the good level of doneness. 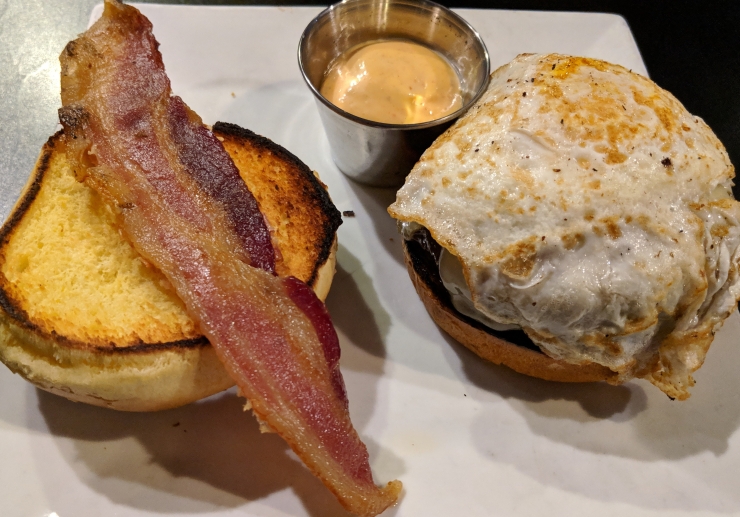 He got pepperjack, bacon (gee golly, one whole slice?!), a fried egg, and harissa aioli. Like I said, it was cooked well. Bacon is delicious. The fried egg was delightfully runny. Was this harissa aioli? You couldn’t tell. It just tasted once again like mayonnaise. I love me some mayo but come on, Big Board. Get it together and make a condiment out of something else.

We passed Five Guys on the way home and both lamented that we hadn’t just gone there, where there is a longer list of potential toppings and the burgers are also cheaper.

Bottom line: In light of new evidence that Big Board can actually cook a hamburger to specification, my husband voted to move them from the “Hard Banned” list (places we refuse to go to under any circumstances) to the “Soft Banned” list (places we will go to if someone else really wants to go and we don’t want to be assholes). I disagree. If you want to go to Big Board for mediocre food, not only will I not go with you, but you can’t be my friend anymore.

PS I never got a glass for my beer.