If I had a nickel for every time one of our friends said, “Hey, you guys like BBQ! Have you ever been to Myron Mixon’s in Old Town?” then I would definitely have at least thirty-five cents. So when we found ourselves in Alexandria on a blustery night, and my request for pho was overruled, we ended up here.

In case it’s not obvious from the picture, the lights inside the restaurant were off and there was a sign on the door. This was when we arrived the first time. The sign read: Due to power outage, we will reopen at 6 p.m. My husband grumbled something along the lines of “What could a BBQ joint possibly need electricity for? They better not be using a pellet smoker!” and we trudged around the corner to Bilbo Baggins bar where, not entirely coincidentally, several servers from Myron Mixon’s were quickly reaching dangerous levels of intoxication.

It didn’t take long to learn that, while they don’t use a bullshit pellet smoker, electricity is extremely useful in a barbecue restaurant for powering the smoke hood so you don’t, you know, die. Apparently during the power outage, Myron Mixon’s was literally evacuated. Since my husband always says that you can judge a good BBQ restaurant by whether it looks as if it has caught fire, I immediately felt like this lent it some credibility. We also found out that the server sitting next to us, who had been told to leave around 2 in the afternoon, was planning to retire to Montana. He also believed that we were planning to do the same which, according to him, we had mentioned earlier in the conversation. We hadn’t. Remember, he left work at 2. This was 5:45. We proceeded to drink our heavy beers and find ourselves inordinately excited about the meat feast that was to come.

Around 6:30, we showed back up to the restaurant. They had reopened although they were hardly busy. “Hey, I just saw you guys!” said our waiter (thankfully one who had had a single drink), and he told us about the specials. My husband ordered a beer and I had the smoked old fashioned, and we placed an order for the special appetizer: pulled pork egg rolls. 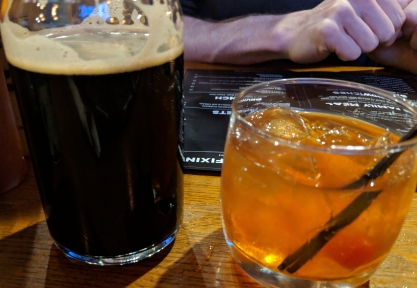 The old fashioned was just fine. It smelled smokier than it tasted, but it tasted like an old fashioned so I can’t complain. Their beer list is solid but not super impressive.

The pulled pork egg rolls came out relatively quickly and were hot off the [hopefully well-ventilated] stove. They were crispy on the outside and came with a dipping sauce that was more sweet-and-sour than barbecue. On the whole, I felt that the egg roll structure overwhelmed the pork flavor and texture. This could have been a dog poop egg roll and I probably wouldn’t have noticed. I also took this opportunity to sample their three house sauces on the table and found myself to be the biggest fan of…[drumroll]…the sweet mustard! [Audible gasp from the audience]. The regular sauce was pretty standard. The vinegar sauce was predictably thin. I was maybe too big a fan of the mustard sauce, though, as I managed to eat two pieces of this egg roll before my husband could even finish one.

Then our meat plate arrived. We got the three-meat plate, which came with two sides and planned to split it. Along with the appetizer, this was a good amount of food for two people. We had a hard time narrowing down our meat choices. Brisket is always a given. Our server pushed us towards the ribs because they had just come out of the oven. Then we had the turkey as a test. If you can make turkey taste good, you can probably make anything taste good. Or so I thought. 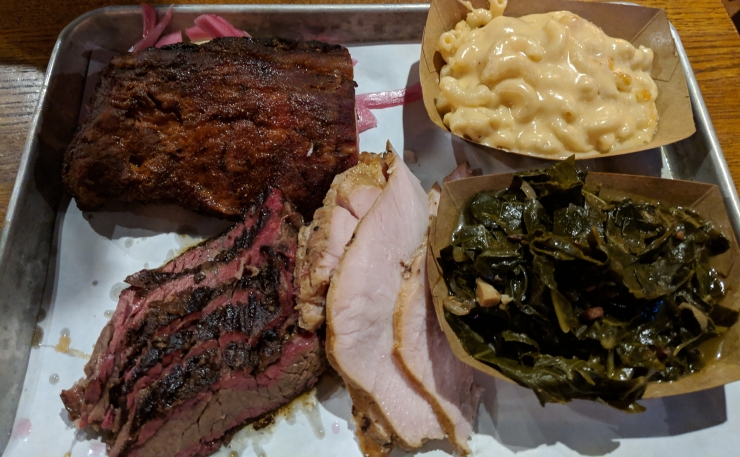 From top left: in my personal opinion, the ribs had the best flavor. They were dry-rubbed and simple, which let the flavor of the pork shine through. On the other hand, they were medium-tough and not falling off the bone. My husband was lukewarm on them. In the bottom-left is the brisket. Good crust, good smoke ring, once again not super-melty, but it was fork-tender at least. It benefited from sauce. The turkey in the middle was moist but not really smokey. I’ve never personally smoked poultry so I wonder if the lack of flavor is just a function of this ordinary, fatless meat. Great texture, though. On to the sides: the collards were tender, smokey, hammy, and flavorful. Don’t get me wrong, I’m happy the veggie was so good, but this should never be the case at a place that’s literally called “Pitmaster.” The mac and cheese was creamier than it was cheesy, but I can’t complain.

Bottom line: I appreciate the selection and sit-down atmosphere of this place and I’d likely return if someone wanted to, but considering that I was already fairly drunk when I came in, and considering that it’s owned by a famous person, the meat should have tasted better.