Sometimes I get really excited about a restaurant while completely forgetting how I even heard of it. Typically I don’t make reservations for places I haven’t at least seen for myself because life is short, and also my “places to eat” list somehow only gets longer. I think the staff at Cork might have inceptioned me and placed this reservation.

Well, whether by inception or some other means (sleepwalking? Multiple personality? Clone?), Cork was on the calendar and as it drew near I grew increasingly excited about it. Not to mention that it’s the perfect Friday Family Funday location, what with wine and cheese and more cheese and whatnot. When we sat down, we received a super thick booklet of wines. In my youth, I always imagined that I would be a fancy wine snob and hold tasting parties at my well-appointed suburban house with my bilingual French/English speaking children (I’m not even joking about this; that is what 11 year-old me thought my adult life would be like. I blame a combination of growing up in Orange County and watching too much Frasier). In my actual adulthood, I will drink wine but don’t give even the slightest rat’s ass about learning about it. So, with that in mind: rosé. Fortunately for the others at the table, our server was knowledgeable about everything and brought my in-laws a bottle of riesling, and my husband ordered a glass of the only style he really cares about: pinot noir (an order I constantly follow up with Titus’s song from Kimmy Schmidt, much to his chagrin).

We ordered three cheeses, naturally. Our server recommended one of the other cheeses over something I had ordered: Delice. I trusted him. His charcuterie recommendations were also the exact things I wanted: duck prosciutto and chorizo. Best friends forever! 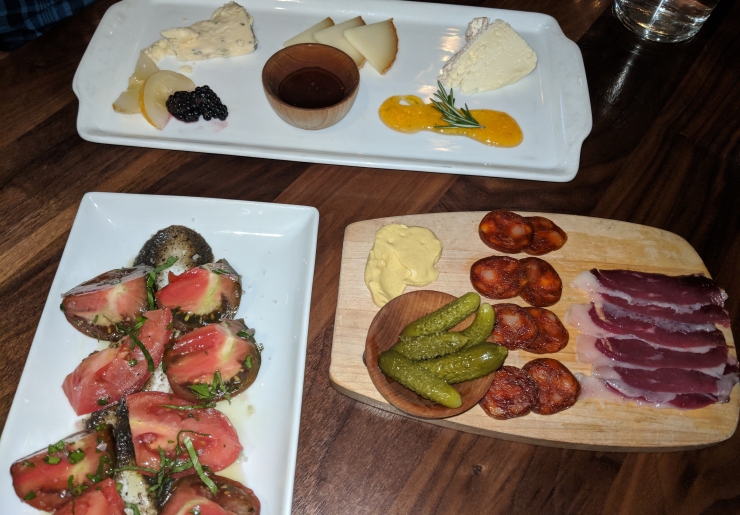 He was NOT lying about that Delice cheese (right side of cheese plate). It was creamy, with a texture somewhere between brie and chevre. The sheep cheese in the middle of the plate was nutty but not overpowering. The chorizo (left meat on meat plate) was warm, spicy, and just fantastic. I have to say, though, that I was really excited about this duck prosciutto and it was not…quite…good. Very ducky, but in a bad way, and very oily. The burrata (bottom left) was also fantastically creamy and was mitigated well with the smokey eggplant sauce under the tomatoes. 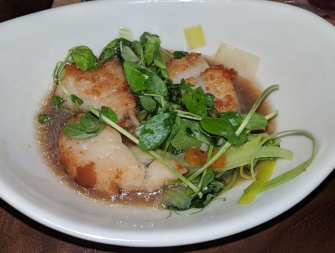 Here we have the scallops in bacon broth. The scallops themselves were cooked to perfection, and we all know that nothing makes you feel more special than when the waiters pour liquid onto your plate directly in front of you, but the portion size was kind of disappointing: two medium-large scallops.

At least the duck confit was slightly bigger. For me, this was the absolute star. The skin was so crispy, the meat was so rich and flavored with anise. I thought I was biased towards this because it’s everything I want in a food, but even my anise-loathing, duck-indifferent spouse thought it was delicious. 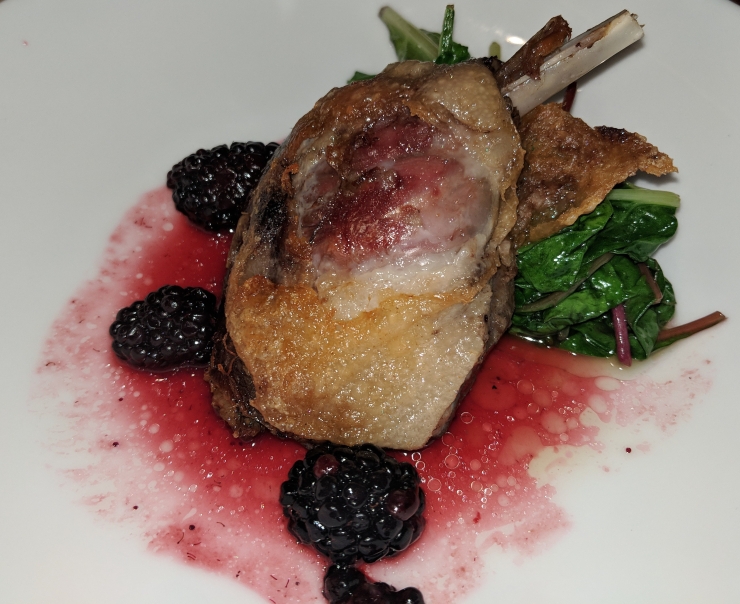 We were still quite hungry afterwards and so ordered the chicken:

Again, it was bigger but still not really sizeable. The fried green tomato was good, and it was served in a sauce that was sweet and hinted at horseradish. It was tasty too, but that duck was a hard act to follow.

My husband and I decided to split a dessert wine and instead of port, our server recommended a sparkling moscato, and promptly brought back a half-pour of it for us to taste (is that guy great or what?) He was also not lying about the wine. It was white moscato which I didn’t even know existed, and was perfumey without being overly sweet.

My mother-in-law ordered the fruit crumble for dessert, which tonight featured peaches and blueberries. It was served piping hot in a cute lil’ cast iron skillet, but honestly, it was just way too sweet and the crumble topping had the grittiness of semolina or rice flour, which wasn’t super pleasant:

Bottom line: Cork is really good but maybe a hair overpriced. It’s worth a trip for a special occasion and the service was top-notch, but prepare yourself for some sticker shock. Listen to your waiter and don’t miss the duck confit.