I love our little neighborhood sushi place but I was recently struck with a fear that I think is totally rational: What if this sushi is total trash and I don’t even know it? I’ve only been to a few places in the DC area and they all seemed pretty much the same. But I also know that my taste in sushi usually starts with the words “eel sauce” and ends with a one-digit price tag. I’m a cheap date, what can I say?

To ease my fears, I picked out Hikari on H Street. A 4.1 on Google reviews, what looked like a varied menu, the price was right, and I could bike there. Even though I started craving sushi around, like, 2 p.m., I held out for actual dinner time at 6 and so it was strange that when we arrived, we were literally the only people in the entire restaurant (unless you count the guy at the bar who was already drunk at 6 p.m.) We sat upstairs on the back patio and a server arrived to give us menus and clean up the table which had been used for a “big party last night” but was somehow inexplicably still dirty at dinnertime with nobody else in the restaurant.

We were given two different menus. When I pointed this out to our server, she told us they were basically the same…except they weren’t. What I believed would be a long list of rolls didn’t seem quite so long on the paper menu, and it was cut down even further by the seeming omnipresence of rolls containing “white tuna.” (For those too lazy to click the link, white tuna is not a thing and what a restaurant calls white tuna is often escolar aka ex-lax fish). I hate being lied to almost as much as I hate diarrhea. So in the end we ordered a safe garden salad, the veggie roll, spicy tuna, and the alligator roll. 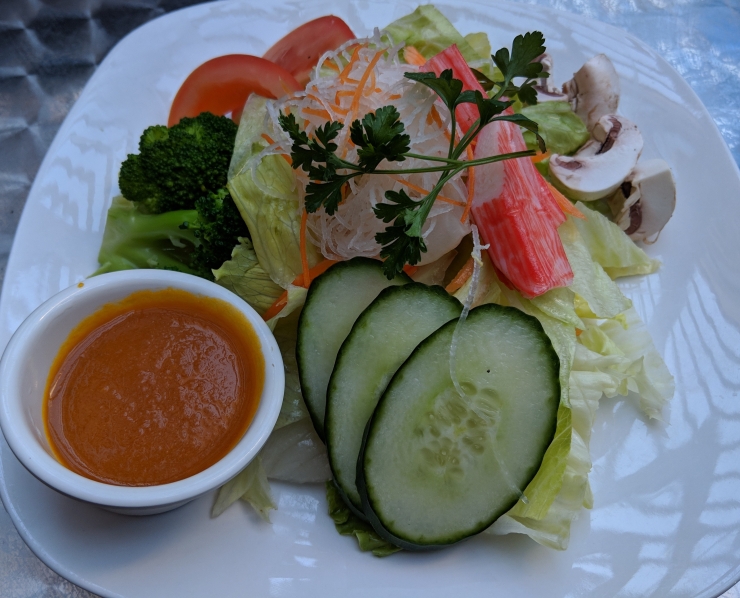 Damn, I love that carrot-ginger dressing. And iceberg lettuce is refreshing after a hot bike ride. But while I know that the unexpected addition of imitation crab is not exactly a lie, the very fact that it exists makes my brain hurt. It also pains me that they lazily threw it onto this salad. It’s like I ordered a pair of running shoes on Zappos and they threw in a shitty Kate Middleton-style lace fascinator for free and then acted like they were doing me a favor. It wasn’t asked for, it wasn’t necessary, and I don’t have any idea what to do with it, but uh, thanks, I guess?

The rolls arrived shortly. The plate looked gorgeous. I poured a little soy sauce into a dipping tray and remarked on the light color. I dipped in a chopstick and remarked on the light flavor. I dipped in a finger and still couldn’t taste it. It is not usually a subtle flavor. I know this a bold claim to make so I hesitate to say this but I am fairly certain that Hikari is watering down their soy sauce. But back to the sushi:

All three rolls were passable. I regret that I ordered the veggie but at least it had avocado. The spicy tuna had a decent zing. The alligator roll, which should have been 100% delicious, was 50% overcooked shrimp, 50% dry eel with only a little sweet eel sauce to moisten the whole thing.

But then came the real injustice: our server came to collect our credit card and walked away with my empty wine glass, but also my husband’s not-yet-empty bottle of beer. What kind of psychopath not only does this, but doesn’t bring it back when they realize their error? I guess I can’t blame her; she needed to turn that table fast. Jk, the restaurant was still empty when we left.

And here’s a map to my local place, Aroi. It may be cheapo trash sushi but at least it tastes good: