It’s not often that I’m in the mood for Italian, because, well, I can boil spaghetti myself at home, so when I want Italian, I want something totally different. Little Coco’s had that going for it from the beginning, exemplified by the fact that I had to google several ingredients while reading the menu.

The main drawback of this place is it’s in Petworth. I guess if you live in Petworth or CoHo, it’s not a big deal, but I felt like I was entering some alternate universe on my way here. All these rowhouses look just like my house, and yet I have no idea where I am…

Everyone at our table started with an alcoholic beverage, mostly beers and wines, but I ordered their house Manhattan. It came in a glass that was approximately the size of a thimble. It was bitter…but good…and despite its tiny size it was surprisingly potent. What did I even drink here? I walked away feeling slightly sloshed after just one of these things.

I was originally thinking I would split a pizza with my beloved husband, and wow did they have some original-looking pizzas. But I couldn’t pass up the opportunity to try one of their really interesting pastas. It was a hard decision, but I finally settled on the squid ink pasta with crab. 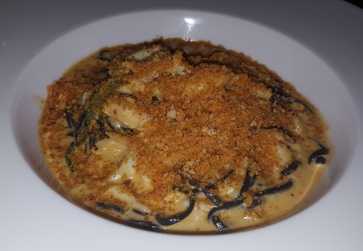 This is a horrible picture that doesn’t do justice to this dish. Under that ‘nduja crumb is was a veritable mountain of flavorful pasta in a light but still-rich seafood broth with chunks of crabmeat and the interesting touch of slivered ginger and sauteed jalapenos. Ordering this was not a mistake. The ginger and peppers added a unique kick that I feel is often lacking in Italian food, and the lobster sauce was just seafoody enough without being overly fishy and gross. P.S. yeah, ‘nduja was totally one of the things I googled at the table. It’s basically spicy sausage meat, you uncultured swine.

My husband and mother-in-law ordered the Mt. Vesuvius and Italian Stallion pizzas, respectively. They were…surprisingly similar. The main draw of the Mt. Vesuvius was the pepper honey that allegedly was one of the toppings. I think I tasted a small amount of this, and the sweetness added an interesting contrast to the spicy meats. There was definitely not enough of it, but it was still a solid pizza, although pepperoni and jalapeno is not anything new. The Italian Stallion was Meat and Onion City, and I mean that in the best way possible. There was no lack of meat here, and two kinds of onions made it pop in a way that a meat-lover’s pizza rarely does alone. This was the pizza winner, although I personally would have opted for either the Caulifornication or the ‘Nduja Really Want to Hurt Me had I had the opportunity. I may just try to recreate one or both of those pizzas at home. These pizzas are totally 2-person splittable.

My father-in-law ordered the lasagna, which had a punny name I can no longer remember. It was definitely good, on the cheesier side, with that caramelized edge I love. It was surprisingly normal considering all the really unique dishes Little Coco’s has to offer. A good option for the person in your group who thinks ketchup is too spicy.

Bottom line: You could do worse than Little Coco’s for sure. I recommend the pasta much more than the pizza, and I suggest that if you do come, you get something out of the ordinary because that’s what they do best. The prices are decent and the vibe is neighborhoody and friendly. So friendly, in fact, that our waitress asked us three times in the span of two minutes if everything was okay, and my father-in-law knew one of the other waitresses from her previous stint at EatBar. Yep, this is definitely a local place.