Could there have been a better night for ramen? I think not. There was a sprinkle of snow on the ground and a steady cool breeze blew throughout the city. Good thing I made these reservations two weeks ago, just in anticipation of winter weather! I’m sure everyone else had the same idea as we did. Oh, you guys want soup now? Well, too bad! My name’s already on the list!

Haikan exists in the same new, upscale area a block down from 930 Club that Hazel does. In fact, I first noticed it on google maps during the same perusing session in which I first found Hazel. And, lucky for me, this is within walking distance of my house.

The restaurant is well-lit and semi-traditional inside with plain plywood benches and bar seating from which patrons can watch the chefs do their thang. It’s clean and minimalist.

Thankfully, their menu is also clean and minimalist. No confusion about the size of the dishes here! They point to ramen on one side (in two sizes and both at reasonable prices!) and small plates/apps on the other side. I ordered their seasonal house Old Fashioned and my husband got a Sapporo because when in Japan… And also they didn’t have any beer that looked much better. My Old Fashioned claimed to include fig (admittedly this was like…80% of the reason I ordered it), but I didn’t get it. Dat star anise though. We had a hard time deciding on an appetizer but we eventually also ordered the daily special pork belly and watermelon. 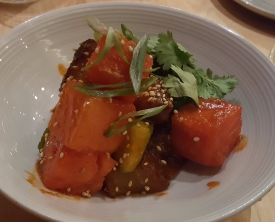 The dominant flavor was sriracha, which was delicious even if it felt slightly lazy. I mean, I can slather my own food with hot sauce, thank you! But the pork belly was crispy outside, tender inside, and the watermelon made an interesting and unexpectedly good pairing, cutting the fat and the spice with juicy, sweet goodness. It was a good sharing size too.

For the ramen, we both chose the small size, hoping to minimize the chances of sloshy-belly on our walk home. We also tried to order things as different as we could. I got the spicy shoyu broth and added woodear mushrooms and the nitamago egg. The hubs got the lighter shio broth with just a nitamago. He wanted to get the “spice bomb” that Haikan offers, but opted against it so that we could taste a wide difference between the two soups.

Service was fast and the small bowl was definitely the right size. No oogly-boogly feeling for us! It’s nice that Haikan offers this. On the other hand, we were both a little disappointed by the small amount of pork in our bowls; just a single thin strip of pork shoulder and some sad crumbs of ground meat as far as we could tell. Compared with Toki Underground or Daikaya whose soups are packed full of shredded meat, this felt sparse. The shio broth was light, slightly fishy, and very gingery. The shoyu broth was richer and had a light spice. I’m glad I got the mushrooms too because they didn’t skimp on these and they added a nice texture. The noodles were abundant and cooked to a perfect al dente. The seasoned egg was soooooo good. Why can’t I make eggs like this? Why can’t I ever even peel my soft-boiled eggs correctly? At any rate, here you get the whole egg, gooey jelly middle and all.

Best of all, we left feeling un-sloshy and without a huge dent in the wallet.

Bottom line: A variety of small plates and different ramen sizes, as well as the ability to make reservations, make Haikan a winner over other local ramen joints. I think Daikaya is better, I think Toki is more interesting, but at least at Haikan I don’t have to wait for hours in the cold, sadly spying on the people lucky enough to be enjoying their hot soup, like the little match girl. I will happily return here.