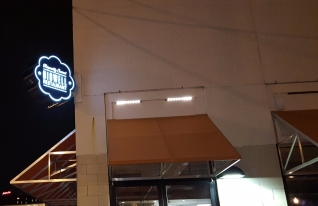 Ahhhh Union Market, the mecca of urban parents trying to feed their toddlers artisanal grilled cheese sandwiches. Bidwell would be no exception and we were not immune to the three year-old screeching in the booth behind us. It’s always kind of creepy when you encounter kids in restaurants in DC, right? You don’t notice that they’re not there until they’re suddenly there. And loud.

I can’t deny that Bidwell is beautiful. It also feels a bit like eating at, say, Cheesecake Factory in that it’s sort of the flagship upscale restaurant inside of a larger food court (the food court, in this case, being all of Union Market). The service was also friendly and the menu was extensive, although my discerning spouse was quite skeptical of their draft beer list.

We got all of our ordering out of the way immediately–a house cocktail, two beers, and a glass of wine, plus their fried deviled eggs and burratta to start. I ordered the arugula and pork belly salad, my husband had the short rib, my mother-in-law got the kekele (prosciutto and pineapple) pizza, and my father-in-law had their daily lasagna special. My mother-in-law was asked what type of pizza crust she wanted, and our server recommended the charcoal crust for its smoky flavor. You see, Bidwell had four types of crust to choose from and not one of them is just a normal pizza crust. Because this is a restaurant that caters to the organic gummy snacks crowed and did you know? Charcoal helps your digestion. It also tastes like an ashtray.

My drink, the You Like Daq?, was grapefruity and refreshing. The starters were also brought out quickly. I have no complaints. I’d never had fried deviled eggs before and they were quite delicious, with a buttermilk dipping sauce that I discovered too late. The burratta was creamy and the beets were roasted and delicious. I wish it had had more of the hazelnut topping. 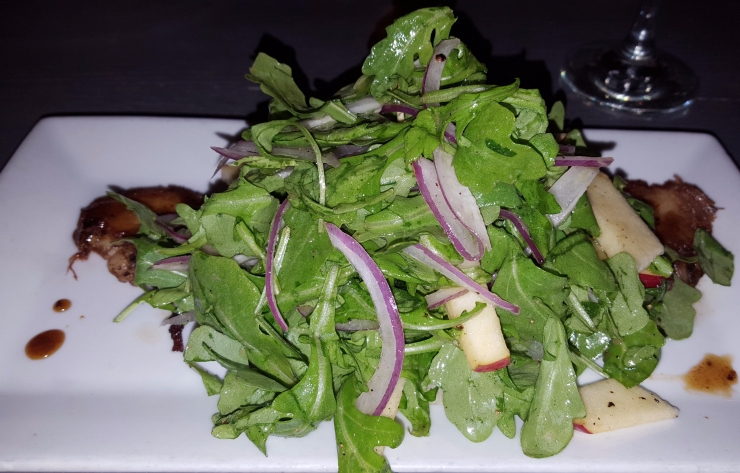 My salad was crisp and refreshing, with apples, which I like, and fennel, which I also like. What first appeared to be two small pieces of pork belly turned out to be one very large piece of very melty, yummy pork belly whose fattiness was countered with the sting of red onion and tartness of apple. Yum.

My husband’s short rib was tasty, moist, and fork-tender with buttery mashed potatoes and a modicum of brussels sprouts that Bidwell would have you believe are “caramelized,” but which were really just lightly roasted. They were certainly not the worst, but they were just brussels sprouts, cooked the way your annoying vegan aunt might cook them. My father-in-law’s lasagna was fairly good lasagna with crispy cheese on top and plenty of meat, but still just…fairly good, standard lasagna.

Finally the pizza arrived. I think they may have started adding charcoal to the crust to cover up their propensity for burning the crust. Prosciutto is good. Pineapple is good. Charcoal crust tastes ashy. I appreciate good ingredients but there is nothing groundbreaking or interesting about this pizza.

We got the dessert menu but nothing looked life-changing so we opted for liquid dessert across the street at Cotton and Reed and were not disappointed.

Bottom line: I guess I’d eat here again if, like, one of my friends’ kids was severely craving organic PB&J or something.